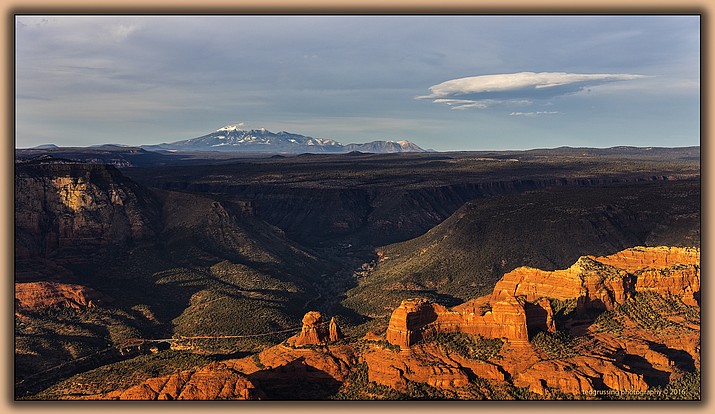 Three minutes after I started rolling on Rwy 21, I was airborne and looking at the beauty up on the plateau … I spent a few minutes getting shots such as this and then headed up to get closer shots … truth be told I like this one as much as any of the others I shot because I captured the beauty of Sedona as well as the peaks and the plateau.

Where are we? Over the Schnebly Hill road and looking pretty much due north. The rock formations in the foreground are the mitten formations and wending its way to the north from the lower left is SR 89A and you can see Midgely Bridge and then follow the road up into Oak Creek Canyon which turns left at the division of canyons; to the right is Munds Canyon. Wilson Mountain is on the left side of the image and on the horizon from the left you can see the top of Kendrick Peak (10,425’), the SF Peaks and Mt. Elden … and of course that really beautiful lenticular cloud which is formed by the wind rushing over the SF Peaks, down the back side, hitting a stable air mass above the surface and ricocheting back up into the sky … totally mind blowing when you think of it. Winds measured at Squaw peak in California at 175mph yesterday – wow!

What a totally amazing gift to be able to live and witness the ever changing earth, solar system, galaxies and universe. In five more years the collision of two stars which occurred about 1800 years ago will be seen in the heavens as a new and very bright star and it will last for about six months before fading. An event that is long ago in the past will soon be revealed to us … just five years to go … some of us will still be here to witness it and some not as our journeys continue.

Wednesday morning at 10AM I will be doing a presentation at the Sedona Heritage Museum in uptown, 735 Jordan Road; think it is open to the public? The theme is Sedona and Northern Arizona From Above. Approximately 90 of the best of the aerial shots will be on display.

Time for a wrap of the day … a good one and still breathing … and smiling.

Enjoy the day and help someone else enjoy it too.

But from the brooding beauty of the night, and daily dancing shafts of golden sun ...

The mystery and wonder of the world ... that play the soundless music of the soul

And fill the heart with memory's olden dreams ... From these will come at last your faith in God.