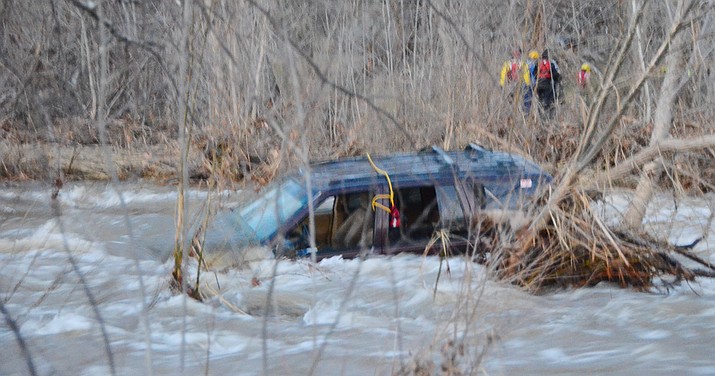 For the second time in three weeks, the Copper Canyon Fire and Medical Authority, along with the Sedona Fire and Verde Valley Fire Departments, rescued motorists attempting low-water crossings in flooded rivers.

This time it was 4:30 p.m. Friday when three motorists tried a low-level crossing in Camp Verde, but the water was too high and their SUV was carried about 100 yards down Beaver Creek, explained Copper Canyon Battalion Chief Dale Duns.

The location was where the Verde River and Beaver Creek merge.

Dun spoke at the scene as it became dark and a helicopter hovered above providing a spotlight for rescuers.

No one was injured and the motorists were “doing well,” said Dun. The three victims refused further treatment after medical evaluation from Verde Valley Fire personnel.

A news release from Duns stated, “The vehicle had been pushed down stream on the Beaver Creek at the WD Lane crossing. The heavy run off from the mountains made treacherous water conditions. Upon arrival, crews made voice contact with the three occupant sitting on the roof of the vehicle about 100 yards downstream from the crossing, where it had lodged itself between some small trees. Copper Canyon Fire and Medical deployed their Swift Water Team which is made up of highly trained technical rescue members. CCFMA also deployed mutual aid teams to support the initial operations. Verde Valley Fire, Sedona Fire, Camp Verde Marshals, and the Department of Public Safety’s helicopter all supported the team and assisted in the rescue of the three trapped patients.

In another swift-water rescue on the flooded Dry Beaver Creek on Dec, 22 in nearby McGuireville, the driver of a truck was also rescued by the swift-water rescue team, firemen and ambulance attendants from the same three departments.