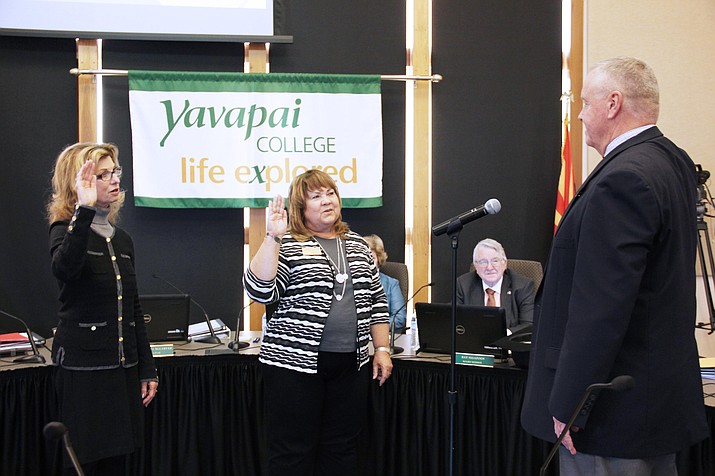 PRESCOTT -- Deb McCasland and Connie Harris were sworn in as members of the Yavapai College District Governing Board by Yavapai County School Superintendent Tim Carter on Tuesday, Jan. 10.

McCasland is now at the start of her second six-year term, while Harris is brand new to the volunteer role. Both are representing districts in the Verde Valley.

Since stepping into the position six years ago, McCasland has consistently fought to bring more attention to the Verde Valley, which she believes is frequently overlooked by the majority of the board. Going into this next term, she’s maintaining her stance.

“I’m hoping to see more happen in the Verde Valley,” McCasland said. “I hope in the budget process, especially the capital improvement fund items, maybe spread some money to the Verde campus, especially help for JTED and reaching our outlying students and remote education centers, those are my two big projects I’d like to see happen.”

Harris, on the other hand, is taking her time to adjust to the responsibility.

“I’ve got my eyes open and I’m working and listening and learning, and so this is the learning curve phase,” Harris said.

Harris is finishing up the term previously held by Al Filardo, who resigned in December 2016. She recently moved to the Verde Valley from the Phoenix metropolitan area, where she spent most of her life. She is currently the director for AdvancED Arizona, a nonprofit accrediting agency for pre-K-12 schools and school systems.

Her decision to run for Filardo’s position was based in her desire to give back to the community.

“I like to be involved in the community, especially the education community,” Harris said.

Right after McCasland and Harris were sworn in, the board moved to elect its new board officers. Patricia McCarver relinquished her position as the board’s chair. Board member Ray Sigafoos was the only one nominated to fill the position. Sigafoos was confirmed with two members in favor, one opposed and one abstaining.

“I’m kind of looking forward for the next couple of years, but we’ll see how it works out,” Sigafoos said.

Board member Steve Irwin was then voted in as the board’s secretary by the same margin.

Board member liaison appointments will be announced at the board’s next regular meeting in February.