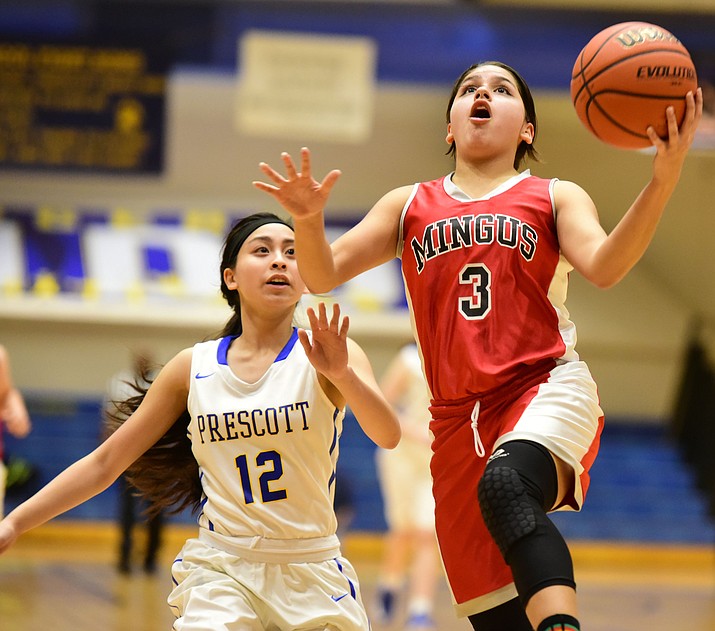 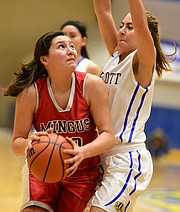 PRESCOTT – Stopping a team’s winning streak can be almost as good as putting a halt to your own losing streak.

Tuesday at Prescott, Mingus Union did both, as senior point guard Destiny Razo scored 18 points and sophomore shooting guard Darien Loring added 14 points to help lead the Lady Marauders to a 44-40 win against the Lady Badgers of Prescott High School.

Typical of the Mingus Union girls basketball squad, the third quarter has been a bit of a grind, according to head coach Frank Nevarez.

Atypical of that grind, Nevarez played several of his reserves in the second quarter. More rested than usual, Mingus Union responded with 14 third quarter points.

“That time off the court in the second helped them out a lot,” Nevarez said.

Junior Tannah Rice, who sees much of her court time with the junior varisty squad, hit a key basket in the second quarter to go along with two rebounds for the Lady Marauders.

Also contributing off the bench for Mingus Union was sophomore Summer Scott, who added four rebounds for the visitors after coming up big earlier in the day for the JVs with nine points, as well as five rebounds and three assists.

Tuesday’s match at Prescott was “an intense game,” Nevarez said.

“The girls played really well,” Nevarez said. “Both Destiny and Darien had big games for us.”

To end the night’s scoring, Emily Bauers hit a free throw with 20 seconds remaining and Mingus ahead 43-40.

“Her basket gave us some breathing room,” Nevarez said of his senior, who finished with five points, four rebounds and two assists.

Abby Chartier led Prescott with 18 points. Prescott’s record is now 1-5 in the 4A Grand Canyon Region, 4-7 in power-point games.

Tuesday’s road victory improved No. 19 Mingus Union’s record to 3-4 in the 4A Grand Canyon Region, 6-6 in power-point games. Saturday, the Marauders travel to Mohave High School to face the Thunderbirds for the second time this season.

On Dec. 5, Mingus Union beat Mohave 42-22 as Darien Loring led the way with 20 points on 6-of-13 from the field, including 4-of-8 from behind the three-point arc. According to Nevarez, Mohave is a “smaller team” than Mingus Union.

“They’re quick, they’re scrappy,” Nevarez said of his Jan. 21 opponent. “We did a lot of pressing, running. And defensively, we played them a 2-3 zone.”

For Mingus Union to again beat the Thunderbirds, Nevarez said the Lady Marauders need to “press, stay focused on our assignments.”

“That should help us get a win,” He said.