Governor: Obama’s Affordable Care Act has been a failure 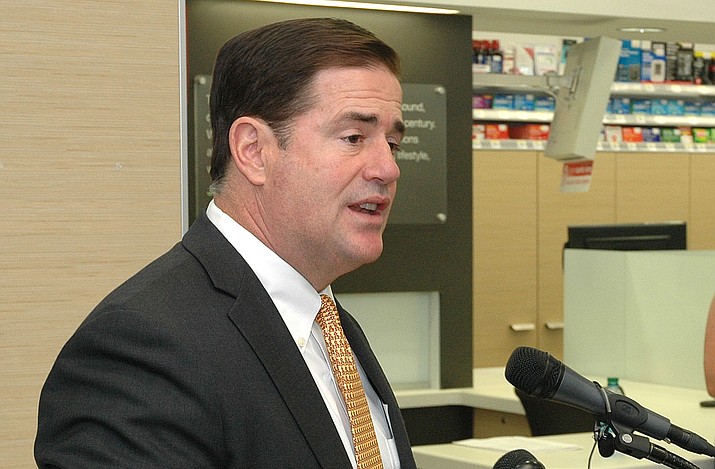 Gov Doug Ducey: "The key is in replacement, something congressional leaders and President Trump all support. We need to replace Obamacare with patient-centered health care reform that actually works for the American people, and especially, for Arizona."

PHOENIX --- Gov. Doug Ducey is giving Congress a roadmap of what he said needs to be done -- both immediately and later -- to repeal and replace the federal Affordable Care Act.

In a letter to House Majority Leader Kevin McCarthy, the governor reaffirmed the stance he took earlier this month that outright repeal of what has been called Obamacare is not an option. He said that would leave Arizona and the rest of the country with what existed before, a system he said is unacceptable.

“Failing to follow through on these federal promises would cause people to lose their plans, prices to increase, and more insurance companies existing the fragile individual market,’’ he wrote in the letter obtained by Capitol Media Services. “Moreover, continuing the subsidies during the transition will ensure that the rug is not pulled out from under people who are currently receiving coverage.’’

Ducey’s letter reflects what has been a developing consensus of not just Congress but also the newly elected president despite the fact that both Trump and many GOP lawmakers ran on the promise that their first act would be to repeal the Affordable Care Act.

Congress already has approved what amounts to a procedural resolution to take up the issue. But the actual act of getting rid of it remains stalled.

In fact, it was McCarthy who reached out to Ducey and other governors for some ideas of what to do next.

Ducey, in his letter, echoed GOP sentiment that the Affordable Care Act has been a failure. And he said that most Arizonans shopping for insurance in the federal marketplace “will have a single choice and will see an average premium increase of 49 percent.’’

But the governor made it clear to McCarthy that many Arizonans are in a far better situation now under Obamacare than they were before.

“It is important to note that there were flaws in the system we had before,’’ Ducey wrote.

“We have all heard the stories of individuals who were unable to find coverage due to a pre-existing condition,’’ he continued. “These individuals need access to health insurance and, for them, the thought of repeal and returning to a time when they could not buy coverage at all is very scary.’’

Ducey also had a few points he thinks that whatever comes next should include.

For example, he said that federal programs do not now acknowledge that some states, including Arizona, allow people who are not doctors to perform medical functions.

That includes advance practice nurses who in Arizona can do things like write prescriptions and pharmacists who are permitted to administer vaccinations without first getting a doctor’s order.

“The result being that federal programs prohibit patients, including in medically underserved areas, from receiving care form qualified professionals even if it means that the patient must instead travel or wait for care,’’ Ducey wrote.”Having all federal programs recognize state scope-of-practice acts is a safe and cost-effective approach to improve access to health services.’’

He also wants whatever comes next to have flexibility for insurance plans and employers to have “wide latitude’’ to develop incentives for people to met health goals like lower cholesterol, weight loss and becoming tobacco-free.

And there’s something else: Ducey wants to be sure that any replacement does not leave hospitals holding the financial bag.

It was that concern in 2013 that resulted in Jan Brewer, Ducey’s predecessor, opting to take advantage of a provision of the Affordable Care Act that allows states to expand Medicaid eligibility at virtually no cost to the state. That enabled Arizona to provide coverage for everyone up to 138 percent of the federal poverty level, about $27,800 a year for a family of three; prior to that coverage was only to the federal poverty level.

More to the point, Brewer said more people with insurance coverage resulted in fewer patients without the ability to pay showing up at hospital emergency rooms for care.

Ducey said the point is well taken. And he said this isn’t just about hospital financial health.

“If hospital uncompensated care increases, hospitals will shift those costs to those covered by private insurance, thereby increasing the cost of care across all markets,’’ he wrote. “The problem of uncompensated care could be even more problematic in rural areas where hospitals are unable to shift costs and could be at risk of being forced to close if they face substantial increases in uncompensated care.’’

Other suggestions by Ducey include: