Helping hands create homes, transportation for those who need it most 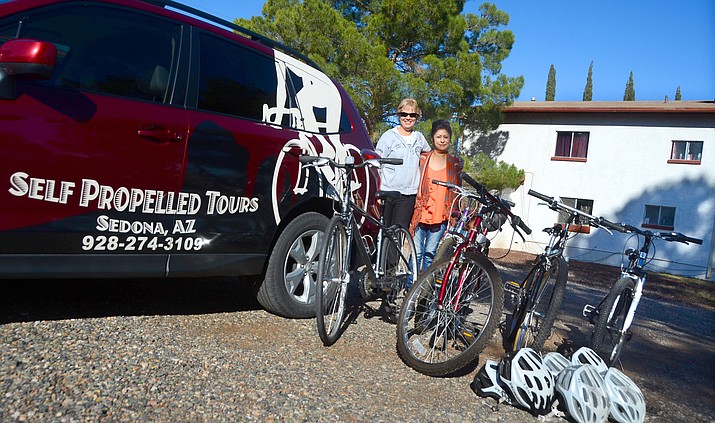 Heather Parris of Self Propelled Tours in Sedona and Angie Lozano unload bikes donated by Parris in front of Angie’s House. VVN/Vyto Starinskas

Heather Parris had a great idea.

If she could get people to donate old bikes and she fixed them up, she could give the bikes to people with no cars. They could self-propel themselves to find jobs, to work and become mobile.

So as the owner of Self Propelled Tours in Sedona, she put out a call to friends and customers for used bikes. She got seven bikes very quickly.

So Parris felt Angie’s Place was the perfect place to donate her bikes to self-propel themselves onto better lives.

“I had all of these bike within two weeks,” Parris said.

Parris said she got seven bikes, but two were not fixable. And then Absolute Bikes Sedona donated bike helmets and Zoomers Bike and Gear fixed the bikes in Cottonwood.

But many people drive by the homes and never know it.

“We want to blend into the regular community,” she said.

“What I want to do is make it easy for someone who needs a place,” she added.

The tight housing market in Cottonwood is making the demand even more difficult, she said. The need is really there because of the increased cost of rent and the popularity of Air B&B or vacation rentals in the Verde Valley.

Lozano said she just got a couple who had to move out their Sedona apartment because it was going to be turned into a vacation rental. A recent bill in the Arizona Legislature struck down local laws prohibiting vacation rental restrictions.

Lozano said she still sees the need for a homeless shelter in Cottonwood with about 20 beds. Regional groups have been meeting for years to build a shelter, but none have agreed on one.

“We need a homeless shelter, we need more. A much larger one.” Lozano explained. “We fill up so quickly. I have to unfortunately say no and turn people away, and it breaks my heart.”

Lozano said most people think the winter is the busiest for her, but the summer heat is tough on homeless people in Arizona.

Lozano said she and her husband took it upon themselves to shelter homeless people over a decade ago. But just last year they became a non-profit and people can now choose to donate tax dollars to Angie’s House and get a tax credit, she said.

Lozano said their houses have 75 beds, and some units have staff. But no alcohol or drugs are permitted.

The “women’s and men’s recovery homes provide a custom program for each person based on what they need,” Lozano said.

Most of the people in her transitional houses are over 55 years old and are families, Lozano explained, adding that the families and children are very proud that they attend school every day despite living in the homeless shelter or in one of her homes.