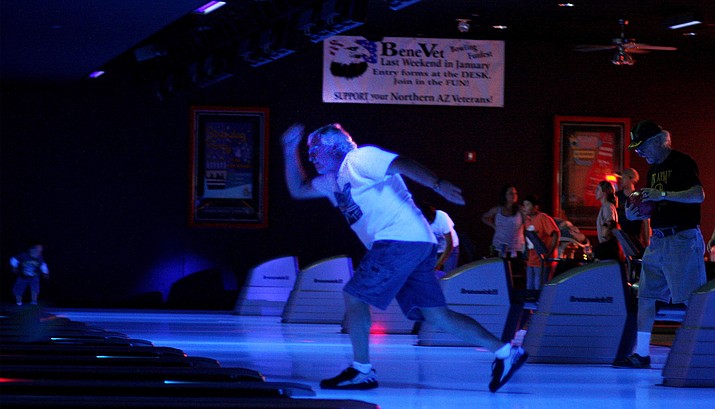 Now in its eighth year, BeneVET is scheduled for Jan. 28-29 at Cliff Castle Casino’s Shake, Rattle and Bowl.

Formed in 2010, the BeneVET Bowling FunFest has raised money for various equipment for the Prescott VA’s physical therapy department, such as computers, hand therapy books and a wheel chair scale. Each year, both Miller and Jacobson ask VA therapists what they need that the VA cannot provide – and then BeneVet makes the purchase with the event’s proceeds. According to Miller, BeneVET raised “close to $10,000” in 2016, which went toward a new tread mill and a NeuroPsychOnline, which is a cognitive rehabilitation therapy system. This year, BeneVET would like to raise enough money to buy a new step machine, Miller said.

Team events cost $20 per person (or $80 for a four-person team). The Saturday evening singles handicap competition costs $25 per person, with $5 per person put into a cash prize fund paid out to the top two men and the top two women. Individual total pins will determine the winners of the singles event.

Come for the opening mixer, held at 10:30 a.m. both Saturday and Sunday. This first event of each bowling day is a four-person team event with no handicap. The team with the most pins knocked down will receive awards. Saturday bowling matches will include a no-tap game, cosmic game and colored pin game.

At 2 p.m. both Saturday and Sunday, the event is an “all mixed up” four-person team event with no handicap. Saturday bowling matches will include a regular game, no-tap game, cosmic game and colored pin game.

BeneVET raises money through its bowling competitions – as well as its raffle.

Each year, prizes such as gift cards, quilts, hand-carved woodcrafts and romantic getaways are available. This year, three Kachinas will also be available at the raffle. Tickets are available at $1 each, $5 for 6 tickets, $10 for 13 tickets, or $20 for 27 tickets.