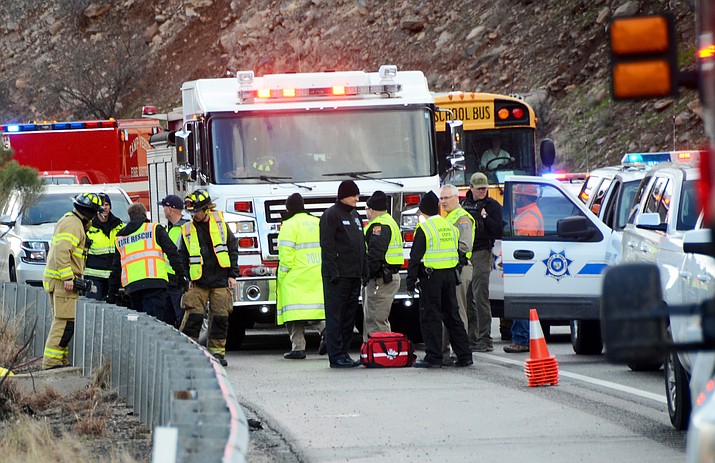 Tuesday’s deadly high-speed pursuit from Gilbert to the Camp Verde area ended when the driver of the stolen pickup truck lost control on I-17 and rolled down a canyon. (VVN/Vyto Starinskas)

CAMP VERE – Tuesday’s deadly high-speed pursuit from Gilbert to the Camp Verde area ended when the driver of the stolen pickup truck lost control on I-17 and rolled down a canyon.

The driver is identified as 29-year-old Bradley Burton Moore. He was a resident of Yuma, but had been recently staying in the Phoenix area, according Arizona Department of Public Safety.

Bart Graves, media specialist for DPS, said DPS Troopers were given information around 12:40 p.m. about a stolen truck taken from a construction site in Gilbert.

Troopers located the vehicle near SR 101 and McDowell Road, said Graves, and began to follow the truck, but never initiated a pursuit with the vehicle.

Phoenix Firebird helicopter responded to the area, according to DPS, to assist by giving troopers up-to-date information on the vehicle’s location.

The vehicle ended up northbound on I-17 with troopers not in pursuit, following about half a mile behind the truck, said Graves.

Phoenix Firebird had to terminate assistance as the weather conditions worsened.

At milepost 242 on I-17, troopers successfully spiked the left front tire of the truck, but the vehicle continued northbound for 22 miles at a high rate of speed, according to DPS.

At milepost 264 on I-17 northbound, troopers successfully spiked the left rear tire of the truck, but the vehicle again continued northbound at a high rate of speed driving on two rims, said Graves.

As the pickup truck approached Copper Canyon at milepost 282, the driver lost control of the vehicle on the left hand curve, said DPS.

“The pickup truck hit the guardrail and rolled over the guardrail, then rolled down the canyon,” said Graves.

The driver was ejected from the vehicle.

When troopers arrived on scene, they immediately began lifesaving efforts until the fire department arrived, according to DPS.

Shortly after, the driver was pronounced deceased, confirmed Graves.