Life in the Slow Lane: Soil

Before the Earth, a Tiny update.

Tiny the Ewe remains pregnant and, boy oh boy, does she look miserable. Her udder isn't big, but it's as round as a ball and so full nothing jiggles as she slowly makes her way back and forth across the fields. She's not one for pats and scratches, but today she let me massage her back just above her tail. Yep, that girl is way ready to dump those little lambikins. Cinco has no sympathy for her and dashes off in whatever direction sparks his fancy without a backward look. Since she can't bear to be apart from him, she's left to waddle slowly after. Because Tiny is so far along, I've been walking out a few times a day to check on her.

Nope, not walking--slogging. I have standing water in the area between my front barn and the orchard as well as in the first of my three pastures. My back barn has become a castle moated by quick-mud. Even the turkeys have taken to walking the long way around to avoid the gooey stuff. But there are places where I don't have puddles and oh how that pleases me!

When I first arrived here almost seven years ago now, the whole front of the property--the area that lacks much tree coverage--was carpeted with half-dead bermuda grass. Without shade and proper irrigation plus improper grazing, the ground had become so compacted that when the tractor's roto-tiller attachment was first put to it, the tines bounced off the ground. The back pasture, the one behind the far barn that's shaded by the massive Cottonwood, was sparsely covered with silver nightshade, horehound and nasty little Mesquite trees. The soil there was a fine, bright red clay. That it was still nothing but clay was surprising given the amount of leaf litter that huge tree drops.

I started with a soil test that recommended soil amendments, which I applied by hand (probably should have worn gloves for some of them, but oh well--I'm old). Plenty of flood irrigation followed along with a few bags of clover and daikon radish seeds followed by a dry land dairy mix of clovers, grasses and vetch. Then I added cows. They came with their big hooves and copious cow pies. Hmm, fresh cow pie. Now, that's a "squelch" that you never forget. Following after them came my chickens and turkeys--my non-gasoline powered roto-tillers--who scratched all that manure around while looking for grain and maggots. Good turkeys and chickens!

I started to see a difference within a year. In the front pastures the grass was greener and the water soaked in more quickly with every month that passed. I left the back pasture to its own devices as no matter how much I or others graded, we couldn't get water to the whole area. 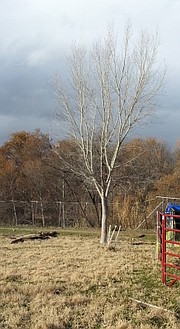 Three years ago, I added four tiny, thigh-high Cottonwood trees to the middle two pastures. The nurseryman who sold them to me assured me they'd grow fast, especially since the water table in my pastures is at about 50 feet. That was, if their roots could break through the rock hard soil. It took a backhoe and more than a day to dig those four holes!

Boy howdy, have those trees exceeded my expectations. They're over 20 feet tall now and I can see the difference their shade is making in the front pasture. Last year, when I decided to plant some Pecan twigs...I mean trees...near those Cottonwoods all it took was a slim trenching shovel. (You know the old saying: "The time to plant trees was ten years ago, dang it!")

But I think I know why only that middle pasture is standing-water-free. Two years ago, back when I still had a working tractor, I experimented on that pasture because I could. I decided to turn it (using the big, non-feathered roto-tiller), tilling in the various grasses and clovers as a green manure. My goal was to barely scratch the surface, so I did my best to keep the tiller at a depth of 2 inches. It was worth the two days it took to complete the job and the next year I was sorry I hadn't done the rest of the property before the tractor did its swan song. Since I turned it, that pasture has become a sponge, soaking up every drop of water that hits it. Where my piggy-girls have turned the soil, it's a gorgeous brown-black. Very nice!

The other two front pastures remain much more compacted, especially the area between my orchard and my front barn. But then, I've pretty much ignored that area because of the difficult fence situation and the septic tank. I'm hoping to change that this coming year. Hugelkulture coming soon to a pasture near you!

There's one other area that's water free--that back pasture. Two years ago, I finally got the flood figured out and seeded it in with a vetch/grass/clover mix that the birds immediately devoured, much to my chagrin. Unwilling to feed them such expensive scratch, I instead started depositing the dirty straw from the chicken coops and turkey barn on that area. Week after week, I'd dump the straw and, week after week, the birds would rush after me, eager to check each pile for whatever treasures it might hold. I went from one end to the other twice, my winged roto-tillers following. This past summer, that area was filled with mullein, native sunflower, not-so-native sunflowers, a few corn stalks, lots of barley and some of the native grasses, the foliage so thick the birds had to shove their way through it. But there was no silver nightshade and minimal horehound (both plants signal nutritional deficiencies). Definitely a miracle!

Right now, that pasture is once again bare, and that means I can see that the soil is no longer red clay. Instead, it's dark brown rich earth just waiting for me to put some sort of seed into it. If only. The problem with those little feathered roto-tillers is that I can't turn them off and they never run out of gas. Dang it!