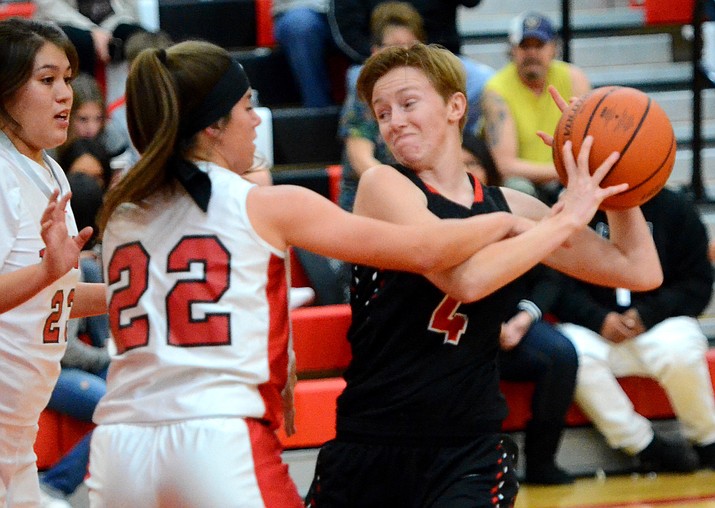 The Mingus Union Marauders scored a season-low 20 points as their two-game winning streak came to an end Tuesday night at home. (Photo by Vyto Starinskas) 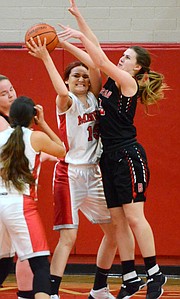 The Mingus Union Marauders scored a season-low 20 points as their two-game winning streak came to an end Tuesday night at home. (Photo by Vyto Starinskas)

COTTONWOOD — Mingus Union girls basketball was unable to replicate its performance at Bradshaw Mountain and lost again to the Bears, 37-20.

The 18th ranked Marauders (7-7) scored a season-low 20 points as their two-game winning streak came to an end Tuesday night at home.

Mingus Union was shut out in the first quarter and scored eight points in the second half.

“It was not good, for whatever reason, we started out slow. We were not on our game,” said Mingus Union head coach Frank Nevarez. “We’re a much better team than we played (Tuesday night) and for us to not even score a point in the first quarter, it sent the tone for the rest of the game.”

While the Marauders didn’t score in the first quarter, they also held the No. 9 Bears (12-8) to four points in the first frame.

“On the positive side, they played great defense, they really, really did,” Nevarez said. “Last time we played them, we both scored in the 50s. Defensively, we played a great game, we really did. But offensively it just wasn’t happening and those games sometimes happen, they just happen.”

After Bradshaw Mountain built a 7-2 lead, Mingus rallied to take a 12-9 lead after a three-pointer by sophomore Darien Loring However, Bears senior point guard Elah Alvis recorded back-to-back steals and lay ups to give Bradshaw Mountain the lead and they wouldn’t relinquish it for the rest of the game.

“We’re happy, we knew Mingus was going to be tough. We only beat them by three last time,” said Bradshaw head coach Rick Haltom. “It was kind of an ugly first half, but the girls kept playing and when they keep playing and playing for the full 32 minutes, we’re a pretty good team.”

Nevarez said the Marauders should have won the game in Prescott Valley, they just lost it in the fourth quarter.

“What’s more indicative of our team is the one we played in Bradshaw, by far because we can score,” Nevarez said. “I’ve got some great scorers, but again, you don’t start a game scoring zero points. It just set the tone for the rest of the game.”