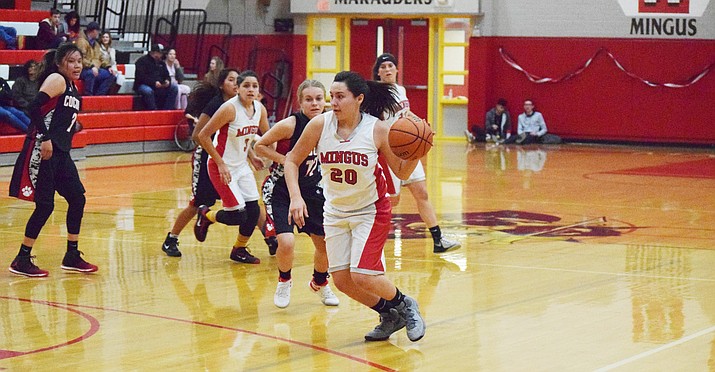 It was Senior Night Friday for the Marauder girls and the last home game for Mingus’ Emily Bauers, who Coach Frank Nevarez said has a never-give-up attitude. VVN/James Kelley

In her final home game, senior Destiny Razo pumped in 14 points for the Marauders in Mingus’ 52-23 loss to top-ranked Coconino. VVN/James Kelley

Mingus Union girls basketball lost their third game in a row on Friday night, but head coach Frank Nevarez was happy with how his team played.

Coconino senior J.J. Nakai tallied 15 points, but didn’t score any in the second or fourth quarters and was held to 5 in the first.

“Personally, I thought our team played very well,” Nevarez said. “They just shot lights out. Their number one scorer, she averages 22, 23 a game; first half she only had five points. I think the rest of the team, they just shot extremely, extremely well. There are times when we played well on defense, they had a just a small little opening, they took advantage of it and they hit the basket.”

The Panthers have won 10 games in a row.

“They shot extremely well, but for us, after the first half, the second half, we came back, we did not give up, I think we showed a lot of pride, a lot of fortitude and we just played very well, so I was really proud of the girls, because they could have given up easily after the first half, but after the half, we came back and said ‘we’re not going to give up’ and they played very well.”

Nevarez said Razo is their spark plug, that he was impressed how Kohlbeck was able to come back from her injury and Bauers works hard and has a never-give-up attitude.