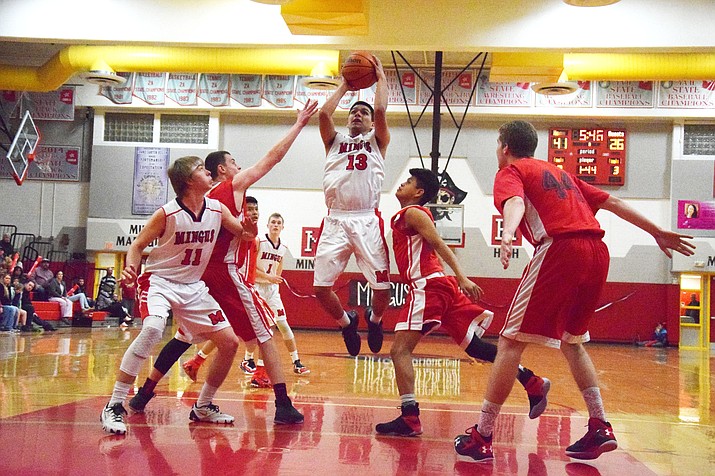 Mingus senior captain Issac Escalante weaves his way to the basket for 2 of his team-leading 22 points in the Marauders’ one-sided 75-55 win over Coconino Friday. VVN/James Kelley

Mingus Union boys basketball rebounded from their first loss since January 11 with a blow-out win on senior night.

While the Marauders (13-15) saw their three-game winning streak end at Mohave in Bullhead City 66-54 Thursday, they beat Coconino 75-55 at home on Friday night.

While Mingus Union led wire-to-wire against Coconino, the Panthers (8-16) seemed to hang around.

“It was an interesting game,” said Mingus head coach Dave Beery. “It’s good to get a win, on senior night at home, obviously we’re happy with that. It felt like we were really close to completely putting them away for a long time and we’ve had issues with that. They didn’t ever really threaten us, but we didn’t ever really slam the door on them either, so it was a little frustrating.”

The Marauders led by eight points early on, then five after one quarter, nine at the half and 16 after three quarters.

“It’s good for these seniors, because they worked their butt off, it’s too bad two of them fouled out, but it was kind of the way that game went, but I’m really proud of them, these guys worked hard,” Beery said.

Senior Jordan Pollock was 1-for-2 from the free throw line but Beery was proud of his him.

“He’s always a leader in the locker room, he’s always saying the right thing, he’s always one of the hardest workers in practice and he’s really made the most of his opportunities in the last month,” Beery said. “Even though (Friday night) he didn’t really get going on the offensive end like he had, he’s really emerged as a guy, he was fighting for playing time to being a key member of our rotation, hard-working, he sets a great example for the other players.”

Mingus has won five of their last seven and are ranked No. 25.

The win comes after a long week.

“It’s hard, we’re running on fumes,” Beery said. “Getting back at 1:30 a.m. (after the Mohave game) and the kids got to be in class at a little after 8 and no one’s getting any sleep, so you’re always worried when you step into a game like that, especially with the emotions of senior night, I was a little we’d come out with a lot of energy and then crash really hard.”