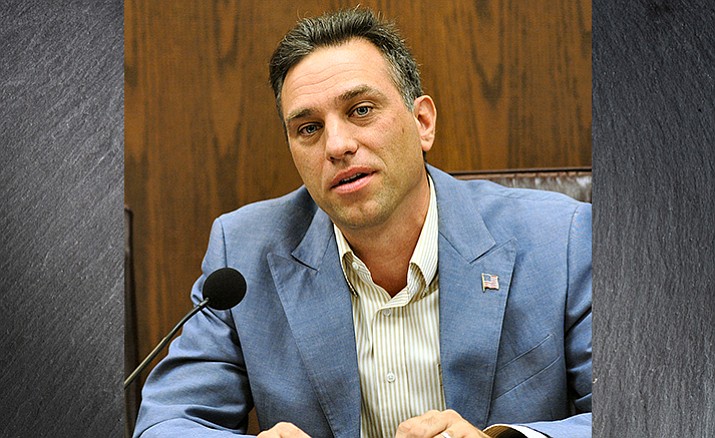 Sen. Steve Smith: “It’s not what you look like nor how you sound” ... the enhanced sentencing would apply to anyone in this country illegally, regardless of from where they came. (Capitol Media Services 2015 file photo by Howard Fischer)

PHOENIX -- Saying the state can’t legally deport criminal immigrants, a Senate panel on Monday took what one lawmaker said is the next best step: Ensure they serve more time in Arizona prisons for the crimes they commit here.

SB 1279 says judges sentencing someone convicted of a felony must impose at least the “presumptive sentence’’ required by law if the person is in this country illegally. That means more time behind bars -- sometimes years longer -- than what is now an option for judges.

Potentially more significant, the measure approved on a 5-3 party-line vote by the Committee on Commerce and Public Safety eliminates the possibility of parole.

Sen. Steve Smith, R-Maricopa, ushered a similar measure through the Senate last year only to have it die in the House. He said Monday he is hoping this slightly altered version meets a better fate.

But the legislation also comes amid a sea-change at the federal level with the Trump administration focusing new attention on immigration, both legal and otherwise.

That point did not go unnoticed by Steve Ronnebeck whose 21-year-old son, Grant, was working the graveyard shift at a Mesa convenience store in January 2015 when he was shot and killed, apparently for not giving someone his cigarettes fast enough.

“We have several cities in our country that are defying the president,’’ Ronnebeck told committee members, referring to Trump’s directive that “sanctuary cities’’ will lose federal dollars. He was present in Washington when Trump signed the executive order.

“Let’s send a message that Arizona’s going to be different and we’re going to set the bar.’’

According to police, the man arrested was in the country illegally, had been convicted of burglary in 2012 and was placed on probation for that offense. A judge had ordered immigration officials be notified of his conviction.

Smith said had this law been in effect in 2015 the person would not have had an opportunity to kill Grant because the judge would have had to sentence him for the earlier crime to at least two years in prison, if not more.

The legislation also drew support from Mary Ann Mendoza whose son, Mesa Police Sgt. Brandon Mendoza, was killed in 2014 by a drunk driver who was not in the country legally. Mendoza, also present for Trump’s executive order signing, said people like that made a conscious decision to enter or remain in the country illegally as well as to commit a crime.

Smith made no bones that he is targeting illegal immigrants. But he said there is nothing racist about it.

“It’s not what you look like nor how you sound,’’ he said. Smith said the enhanced sentencing would apply to anyone in this country illegally, regardless of from where they came.

And he said nothing in this measure will affect other people not here legally -- as long as they remain on the right side of the law.

Will Gaona, an attorney with the Arizona branch of the American Civil Liberties Union, said the legislation is illegal. He said it effectively becomes a state court imposing a punishment on someone because of a violation of federal law.

“Courts have already found this to be unconstitutional,’’ Gaona said.

He pointed out that Arizona law already requires the Department of Corrections to notify Immigration and Customs Enforcement before someone is released to hold that person for deportation. Worsley said this just delays that inevitability.

“So it sounds like we’re going to pay to incarcerate -- and then turn them over to ICE at the end of their full sentence,’’ he said, though he eventually voted for the measure.

Smith, however, said incarceration costs actually went down in the years following SB 1070, a 2010 law aimed at illegal immigration. Many of those provisions, however, have since been struck down. But some survive, including one requiring that police officers, when possible, check the immigration status of people they have stopped for any other reason.

“Could it be that you would have a decrease in prison costs as a result of the deterrent effect?’’ Smith asked in defending SB 1279.

Department of Corrections lobbyist Art Harding, however, declined to speculate on the fiscal impact of the legislation. He said the number of undocumented immigrants behind bars decreased in the years after that law was passed. But Harding said there also has been a drop in the overall number of people being sent to his agency.