Cottonwood Clippers 15 and over boys swimmers dive into the pool at the Cottonwood Recreation Center Pool in the 50-yard butterfly on Friday night. The Clippers hosted the Red and White Meet, an intrasquad competition. (VVN/James Kelley)

Before their Fourth of July break, the Cottonwood Clippers Swim Team faced off against each other in the Red and White Meet.

“It was kinda fun for the swimmers to get to compete with each other,” Gretchen Wesbrock said. “We usually take off a week for Fourth of July, so it’s kind of a way to do one last hurrah. Some of our meets are far away, so we have meets in Bullhead or Kingman, so that can be kind of hard for families to make it, so it’s nice to have something here.” 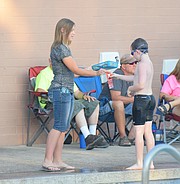 Cottonwood Clipper Logan Newell receives second place ribbon at the Clippers’ Red and White Meet for his performance in the boys 9-10 25-yard butterfly. Cottonwood Clippers head coach Gretchen Wesbrock said she has been impressed with the younger swimmers this season. (VVN/James Kelley)

plus in 50 yard races in fly, back, breast and free.

At their most recent meet, the Sedona Splash, the Clippers took third in the combined team scores, fourth for girls and third for boys, but racked up the individual wins.

Fletch Fangman won the boys 15 and over 200-yard breaststroke and the 100y breast He was third place overall for boys 15-18.

They also won the mixed 13 and over 400 yard freestyle relay with Fangman, Hannah Arwine, Burke and Tillemans.

Gretchen Wesbrock said the season has been wonderful so far.

“We have a really big team and I think we have seen a lot of, especially with the younger kids, stroke improvement,” Gretchen Wesbrock said.

She said lots of the Clippers have impressed her, especially Emma Warner, who is battling thyroid cancer.

Cottonwood Clippers 9-10 Kei Martinez comes up for air on Friday night at the Cottonwood Recreation Center Pool in the Red and White scrimmage. On July 22 the Clippers will host the Verde Valley Invitational. (VVN/James Kelley)

Warner was all-state last year as a freshman for Mingus Union and was named an “UP & Comer” by Swimming World Magazine.

“It’s pretty phenomenal and I think a lot of times people don’t understand what that takes and there’s a few swimmers that were beating her now that weren’t beating her before but it’s because of what she’s been through and I just love seeing that work ethic, it’s pretty incredible,” Gretchen Wesbrock said. “So it makes me a little emotional.”

On July 22, the Clippers host the Verde Valley Invitational.

Gretchen Wesbrock said the development of the younger swimmers has also been impressive. Her husband John Wesbrock has taken over as a head coach for the younger kids.

“A lot of them were coming out of swim lessons with a lot of the basics but we kinda had to get them to some more advanced skills and we’re seeing that paying off, which has been really great,” Gretchen Wesbrock said.

The Clippers had a meet on Saturday at Prescott Valley but the results were not available at press time.

Gretchen Wesbrock said the biggest surprises have come from their “B” team, which her husband and Kyla Furey have been coaching.

“Seeing them conquer things like flip turns or you know watching them do the right under water or do the right stroke because sometimes the right stroke is not as fast as sneaking in some, like on the butterfly doing some flutter kicks or the breaststroke doing some flutter kicks,” Gretchen Wesbrock said. “So it’s been fun to watch them see ‘ok, I’ve got to do it right even though it might slow me down’ and then to watch them improve from there.”