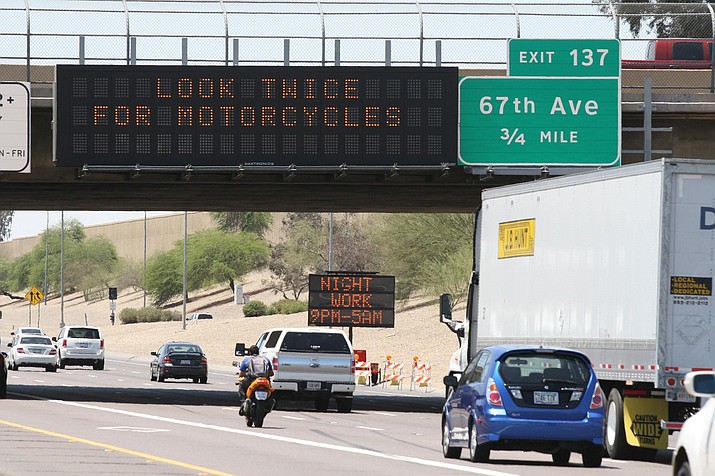 PHOENIX – Traffic fatalities on Arizona’s local roads and state highways climbed higher for the second straight year and driver behavior continues to be a leading factor in motor vehicle collisions, according to the Arizona Department of Transportation’s annual Motor Vehicle Crash Facts report.

The Motor Vehicle Crash Facts report is a compilation of traffic crash reports provided to ADOT by law enforcement agencies around the state. A glance at the report reveals how better decisions made by motorists can save lives. Seat belts, speeding and reckless driving, and impairment are among the leading factors in traffic fatalities:

Buckle up – 250 of those killed last year weren’t using a seat belt.

“Making travel safer begins before drivers turn the ignition,” ADOT Director John Halikowski said. “Too many people make the deadly decision to drive impaired, whether by alcohol, prescription pills or other drugs, and put all of us at risk. None of us should accept this selfish behavior and it’s everyone’s business to stop impaired drivers from getting behind the wheel.”

“The gains made in reducing alcohol-related crashes and fatalities are steps in the right direction, but there is still much work to be done,” said Alberto Gutier, director of the Governor’s Office of Highway Safety. “Driving impaired is a choice and people need to be aware that it’s a choice they don’t have to make – there are many other ways to get home safely.”

The highest annual number of motor vehicle crash fatalities in Arizona – 1,301 – occurred in 2006. While collisions and fatalities have risen in recent years, 2016 totals are below where they were a decade ago, despite having nearly one million more licensed drivers and registered vehicles traveling today on Arizona’s roadways than in 2007.

The number of motorcycle operators and passengers killed in traffic crashes went up in 2016 to 144 from 134 the year before.

Dr. Cara Christ, director of the Arizona Department of Health Services, noted the decline in the number of fatalities involving people who weren’t using seat belts, which fell from 258 in 2015 to 250 last year.

“While we’re encouraged to see a decrease, one death is still too many,” said Dr. Christ. “Make sure everyone is buckled up every time, regardless of how far, fast or familiar your drive may be.”

Here are other figures from the 2016 Arizona Motor Vehicle Crash Facts report:

Of all alcohol-related crashes, 78.8 percent occurred in urban areas and 21.2 percent in rural areas.

One person was killed in a motor vehicle crash every 9.11 hours.

More crashes occurred in March than any other month with 11,391.