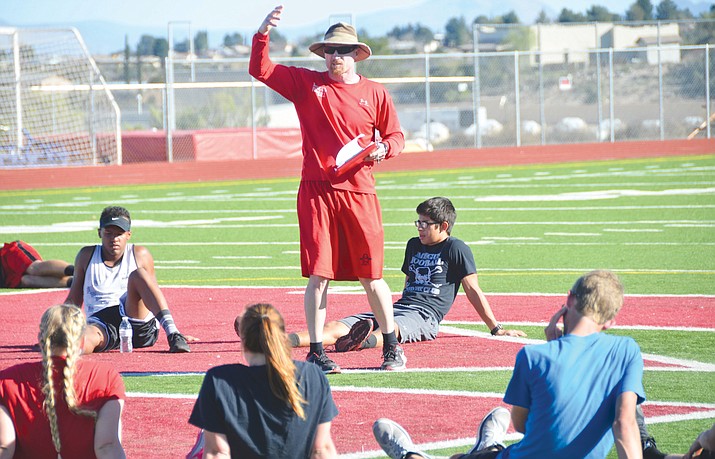 Last week the Mingus Union board approved the elevation of Yancey DeVore to athletic director. DeVore is a government and Econ teacher and was the track and field coach.

“It’s exciting to head up the program here at Mingus,” DeVore said. “We’re going to be looking at how we can make our program better.”

Allen Mitchell, the previous athletic director is now solely an assistant principal. Mitchell became the AD in 2013. Mark Owens stepped down after two years at the helm of Mingus Union sports. Mitchell was vice principal, dean of students and athletic director.

A longtime coach, DeVore said becoming athletic director was something he thought about pursuing if he ever went into administration.

DeVore led the track and field team since 2012 and has taught at Mingus Union since 2004.

Even though he just started his job, DeVore said he has gotten support and encouragement from the coaches.

“I’ve only been on the job for just a few days now, but it’s great,” DeVore said. “There’s a lot of things that I want to do differently and there’s some things that are going to be the same and now I’m just excited for the challenge and to try to work with the coaches and there’s an excellent staff that I get to work with, so it makes my job easier when you have good coaches that are already in place.”

DeVore said he wants to evaluate the hiring process and connect the Marauders to the community even more.

DeVore was also varsity football assistant and JV baseball head coach. He graduated from Mayer in 1990, where he played football, basketball and baseball.

He was All-State at running back and All-Region at guard in basketball. He played football at Eastern Arizona and then transferred to Northern Arizona after suffering a career ending injury.

“I think any kind of coaching experience helps and I do bring coaching experience to the table, so I have an understanding from a head coach, because I’ve been a head coach, from an assistant coach because I’ve been an assistant coach, from coaching freshmen up to varsity on multiple sports,” DeVore said. “So I think it helps to understand from a coaching side of it, it will help me as an athletic director absolutely.”

DeVore graduated from NAU in 1997 and worked as a police officer for three years with the Flagstaff PD. He then worked with his wife, Jennifer, in a Christian ministry and then earned a post baccalaureate degree from Arizona State.

One of his first orders of business will be to fill a familiar role.

“I’ve resigned from the track position as I wanted to spend my time making sure that the athletics part of it is taken care of,” DeVore said.

The Marauder family will grow by one this fall.

Golf has been on the incline at Mingus since at least last fall when the Marauders reached the state tournament for the first time since 2009. The 2016 team only had two seniors.

While DeVore will need to hire a track and field coach and cross country coach, some of the Mingus Union positions have been filled.

Klint McKean will return to the head wrestling coach role. He was an assistant in 2016-17 and previously led Marauder wrestling.

He graduated from Mingus Union in 2001, was a state champion in high school, coached Cottonwood Middle School wrestling and teaches English at MUHS.

The board hasn’t approved his promotion yet but DeVore doesn’t anticipate a problem with his appointment. Mingus Union Business Manager Kirk Waddle was the 2016-17 Marauder wrestling head coach.

Boys soccer will also see a “new” head coach in Calvin Behlow. The Mingus Union social studies teacher lead the Marauders for four years before resigning in February, only to return to the post, pending board approval.

Mingus Union hasn’t hired a girls varsity head coach yet. Andrea Strobel, who also resigned from her English teaching job, stepping down after the season as well.