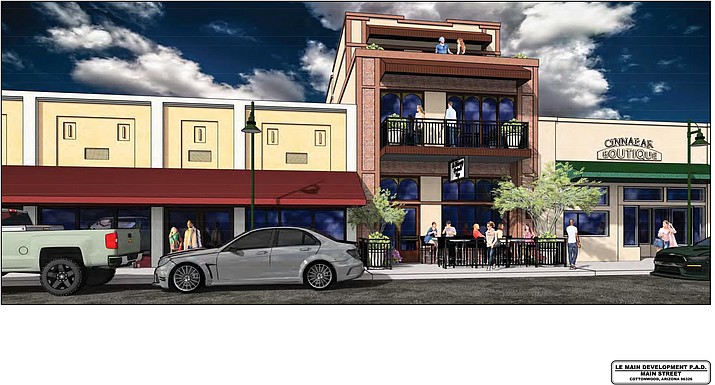 A rendering of the LeMain Development in Old Town. (Courtesy image)

There were no citizens who spoke out against the city budget during the allotted public hearing. Rudy Rodriguez, the city Administrative Services General Manager, gave a brief describing some of the major changes in the budget and the reasons for those changes.

One change was the two eliminated officer positions and one communications specialist from the police department – the positions were eliminated because the positions have not yet been filled, not because they were furloughed. Another change is the 4 percent increase in employee health premiums.

The adopted budget is higher by $20,138,715 than the 2017 Revised Budget due to updated numbers discussed during this year’s budget sessions, an increase in indirect costs, and adjustments to rollovers due to capital projects in progress, but not completed in fiscal year 2017.

Items that were considered, discussed and included in the budget are:

Elimination of two Police Officers and one Communication Specialist position

Did not fund COLA;

Did not fund longevity;

--Jennifer Volpe contributed to this story

The council approved awarding $10,000 of the Building Community Grant to Habitat for Humanity, and awarding the remaining $5,000 to Old Town Mission. The grant will allow Habitat for Humanity to serve 10-15 homeowners in Cottonwood and the Verde Village. Old Town mission will use their grant allotment to build a fence around their community garden.

The council encouraged the other applicants who were not awarded the grant to apply again next year. “I like that it is competitive, it keeps the organizations sharp, but I also wish that we could give more,” said Mayor Tim Elinski.

Approved: Appointing a Member to the Historic Preservation Commission

Michael Matthews was the sole applicant for the open position on the Historic Preservation Commission. “I’m at the point in my life where I have free time, and I’d like to give back to my community,” stated Matthews when questioned by Mayor Elinski on why he wanted the position.

Councilmember Kyla Allen questioned where Matthews currently resides and stated her copy of Matthews’ application did not have his current address filled out, and instead had only his P.O. box. Matthews stated he has lived in Cottonwood for six months and that it is a “matter of record.”

Allen expressed that the council should hold off on appointing Matthews until the next meeting, when they received his proper address. Councilmember Tosca Henry stated it was unclear whether the address on the application had been redacted as opposed to not filled out at all, as Matthews’ signature was redacted. Henry expressed that she felt by waiting until the next meeting the council would be “discouraging volunteer applicants.”

The council approved to change the zoning of two vacant parcels of land in Old Town from light commercial to planned area development. According to the meeting agenda, the building on Main St. will be three stories high, with 2,200 square feet of commercial space on the lower floor and three residential units on the two upper floors ranging from 1,100 to 1,800 square feet. The Cactus Street building will have two residential floors situated above a ground level parking garage. A total of six residential units will be for sale, ranging from 950 to 1,400 square feet. Both buildings will be no more than 35 feet in height.

The council did express concern about where the residents of the building would park, as there are eight parking spots for the nine units. They expressed hope that the project owners would make a good faith effort to fit a ninth parking spot into the project plan. “We’ll constantly be chasing the parking issue,” stated Mayor Elinski. The council expressed that the project would be an improvement to the vacant lots.

The council approved the motion to provide camping spaces to attendees of Thunder Valley Rally at Riverfront Park. Alcohol will be sold and allowed within the softball complex. Security will be provided.

The council approved for road closures in Old Town from 10a.m. to 4p. on Friday, Sept. 15 and from 6 a.m. to 4 p.m. on Saturday, Sept. 16 and ending on Sunday, Sept. 17 at 10 a.m. Motorcycle-only parking will authorized from Main Street and North Willard Street to Main Street and Pima Street.

“I think closing the streets is a poor fit. The council knows how I feel about this,” stated Mayor Elinski, who was opposed to the motion.