Valley Academy signs off on new partner agreement
Camp Verde, Mingus, Sedona districts would get ‘up to 70 percent’ of course costs 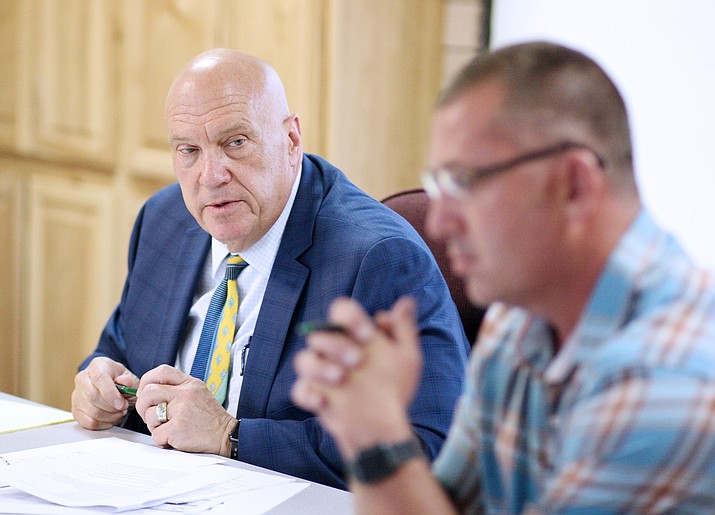 From left, Valley Academy of Career and Technical Education board members Frank Vander Horst Jeff Wassell, during Monday’s board meeting. Monday, the V’ACTE governing board approved an Intergovernmental Agreement with Mingus Union, Camp Verde Unified and Sedona Oak Creek school districts with wording that differs from an agreement that representatives from each of the four districts structured in late June. (Photo by Bill Helm)

COTTONWOOD – If the relationship between Valley Academy of Career and Technical Education and Mingus Union High School and District is akin to a rocky marriage, then Monday’s 5-to-0 decision by the V’ACTE board to accept a different Intergovernmental Agreement than one negotiated in June by representatives from four school districts is a sign that reconciliation may not happen anytime soon.

According to the agreement brokered in mid-June by representatives from V’ACTE, Sedona Oak Creek, Camp Verde Unified and Mingus Union school districts, Valley Academy would pay a 70/30 split for the satellite campus programs, which are career and technical education programs taught at the high schools.

On June 28, the V’ACTE board did not take action on the IGAs, meaning it did not approve the IGA its representatives helped create. In on the negotiations were Valley Academy Superintendent Bob Weir, as well as board members Frank Vander Horst and Jeff Wassell.

“After a long discussion, they have given me a direction to offer some changes to the IGA,” Weir stated in a June 29 email to the representatives from Sedona Oak Creek, Camp Verde Unified and Mingus Union school districts. “They have issues with some of the wording on the equipment and the percentage of funding. They are not interested in listing anything above 70/30 split and they feel it should say course cost since that is what is in ARS 15-393.”

Who owns the equipment?

Also important to the IGA negotiation process was agreeing to who owns career and technical education equipment should one of the partnering schools end its affiliation with Valley Academy.

According to Dr. Keegan, now a negotiator for Mingus Union, if V’ACTE’s partnering districts – customers – generate the money, “they should get the equipment.”

“Once they give you the money, you buy the equipment, it’s yours,” Dr. Keegan said.

On hold from Monday’s meeting is a Memorandum of Understanding between Valley Academy and Camp Verde Unified School District.

The understanding – MOU – is a five-year agreement that Valley Academy would provide as much as $60,000 for career and technical education capital improvements. At Monday’s meeting, the V’ACTE board unanimously agreed to table the MOU vote until an IGA with Camp Verde Unified is signed by both sides.

“We have to have an IGA in place before we can transfer money,” Weir said.