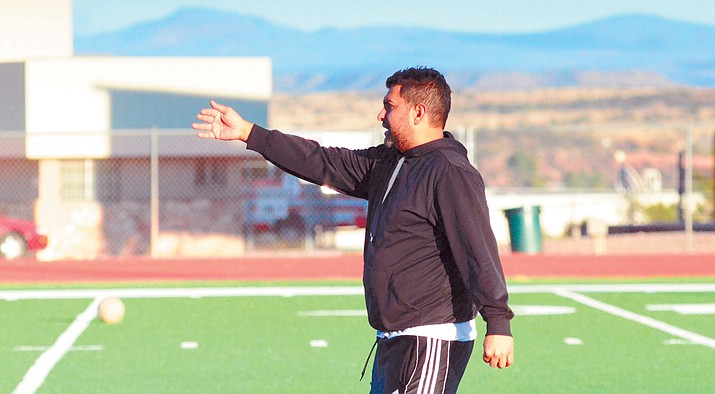 Mingus Union head boys soccer coach Calvin Behlow decided to return to the post after resigning months ago. Behlow has been the Maruaders’ head coach for four years and served as an assistant for seven seasons before that. (VVN File Photo)

Calvin Behlow stepped down from the Mingus Union head boys soccer position for family and now he’s coming back to it for family.

With his daughter entering her second year on the varsity girls team and his son his senior year, Calvin Behlow resigned from the head coach job after the 2016-17 season so he could watch his kids play more. In high school soccer the teams play at the opposite site, so like if the boys hosted Flagstaff, the girls would play at Flagstaff.

However after a new coach wasn’t found and his son Ezekiel Behlow and nephew Cayden Ontiveros asked him to come back, Calvin Behlow decided to return to his post. Ezekiel Behlow, midfielder and forward and Ontiveros, a defender, are both seniors now.

“We were hoping to have a coach in place before the summer came but it just didn’t happen,” Calvin Behlow said.

“Kids don’t want to guess, they want to know what’s happening and by them not knowing what’s happening, I just felt that the program wasn’t able to gear up for the season that they should have this year,” Calvin Behlow said. “There’s some amazing talent right now and it’s senior heavy I hate for them to miss out a year that I could have helped.”

The girls team also lost their head varsity coach as Andrea Strobel resigned after the season and from her teaching job at the high school for “personal reasons.”

Calvin Behlow’s daughter Jaiden Behlow is midfielder. With the girls job open, he considered it.

“I had a long talk with my daughter about my role as the coach there and I didn’t feel like I was ready to take the girls program yet, knowing that I didn’t see any of her games last year,” Calvin Behlow said. “I’d hate to miss all of my son’s games this year, if I took the girls on, so I definitely couldn’t take the girls this year. In a perfect world, two coaches that I really know and trust would have stepped up and I could have been able to help both sides. Since they were still looking for coaches on both sides, I figured it would be better for me to just step in and commit one year.”

Calvin Behlow said he committed to return because he wanted DeVore to have less to worry about. DeVore has to hire eight other coaches. He said the new cross country coach is the most pressing because it’s a fall sport.

“Let’s face, he’s got a lot on his plate, me him hawing and teeter tottering if I’m going to do it or not is just adding more stress to a position that I really hope that he is fabulous at,” Calvin Behlow said. “So anyway that I can help him, I’m going to, so I’ve already told him that I’m going to coach the boys next year.”

With no coach in place, Mingus Union wasn’t able to do all of its summer soccer activities. In the past they have done indoor and field work and played Camp Verde, Chino Valley, Bradshaw Mountain.

The paperwork wasn’t filed to play games and many returning varsity players had made other commitments for the summer. Calvin Behlow said he didn’t want to field a weakened team.

The Marauders will play the same tough schedule as last year and expect to make the state tournament. Last year they played six of the 16 teams in the tourney.

“Our schedule is going to be tough again this year,” Calvin Behlow said. “I think that we can fight to be one of the best teams in the state, top 16 and get into the state playoffs this year. Competing with the Coronados and the Metro Techs and the Dysarts is going to be difficult for a state title, but I think that we can make an appearance at state, I don’t see why we shouldn’t be able to.”