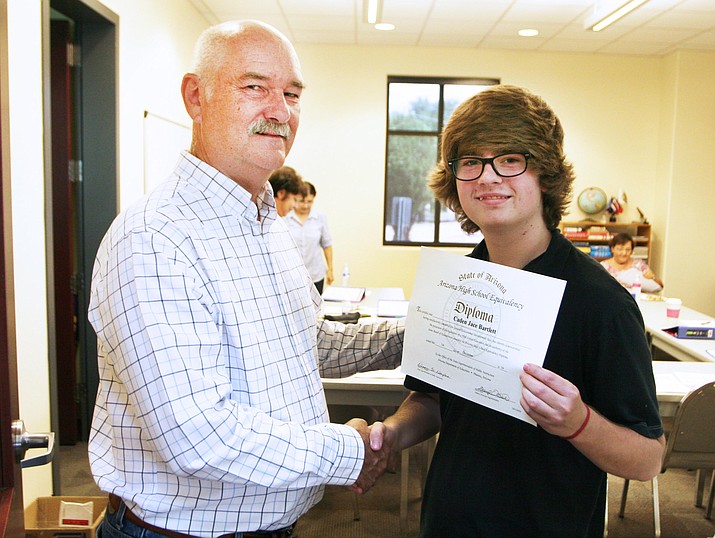 In 2014, Bartlett, then a freshman at South Verde High School, made a rather unique sacrifice to tend to his elderly grandparents.

He dropped out of school.

“They needed help,” the Rimrock resident said. “And I needed a school that was more flexible. I couldn’t attend school full time.”

Barely a month later, Bartlett was already making plans to finish his schooling.

“I wanted some way of getting my education,” he said. “A family friend told me about the Camp Verde Adult Reading Program. Said it was close by, that I should check it out.”

Committed to going back to school, but even more dedicated to his grandparents, Bartlett spent the next two years working toward his GED.

“He’s a very bright young man,” CVARP Director Doug Watson said of Bartlett. “He just needed a little push to get going in the right direction.”

Mathematics and science are Bartlett’s favorite subjects, as well as a digital media class he once took at Camp Verde High School. But Bartlett succeeded in all of his studies at CVARP and in December 2016, he earned his GED.

As of July 1, the Camp Verde Adult Reading Program no longer qualified for state funding, a hit of more than $100,000 annually.

A significant amount of capital for a program that runs out of the Camp Verde Community Library, according to Kelly Roberts, CVARP office manager.

“Since we no longer are receiving funds from the Department of Education, as they no longer want to fund small programs, we have been looking for other sources of income,” Roberts said.

Fortunately for the Camp Verde reading program, funding found them.

Thanks to the Don and Luda Soldwedel Charitable Trust, CVARP has received more than $125,000 in stocks, which “right now has a value of about $150,000 in rough figures, Watson said.

According to Watson, the Camp Verde Adult Reading Program plans to invest the stocks to “create a regular yearly income” for the program, to not spend the principal, to only spend the interest “and use it for our mission.”

And to help students such as Caden Bartlett.

To invest the money and to live off the interest, Watson said, was agreed upon by the CVARP governing board. According to board President Alice Gottschalk, the program’s mission is to offer adults in the Camp Verde and adjacent Verde Valley communities the opportunity to achieve personal goals through improved basic reading, writing, math, technological and life skills.

Watson said that the charitable donation would pay for salaries, online curriculum for students, books, perhaps even new computers when the need arises.

“To help people earn their GED and learn English, as well as help people develop their other skills that fit within the mission of CVARP,” Watson said.

Before receiving the financial gift, the Camp Verde Adult Reading Program was forced to cut instructional hours to account for the loss of state funding.

Even with the additional revenue, the Cottonwood and Camp Verde locations are open a total of 12 hours during weekdays, an additional three hours in Camp Verde at night, and for its English Language Acquisition for Adults program, another four hours each week.

It takes more than hard work to keep programs such as CVARP alive.

“It will also take community involvement, like the generous donation that we have received,” Gottschalk said.

The Soldwedel family owns the Camp Verde Bugle, as well as many other news media outlets in Northern Arizona.

The Cottonwood LEARN Center, a part of the Camp Verde Adult Reading Program, is located at 1500 Cherry St. in Cottonwood, in the DES Building.

After a summer break, CVARP’s GED classes will start on Monday, July 17. All classes are open enrollment and students may register at any time through the year.

Earning one’s GED is “easier than people think,” said Bartlett, 18. “It’s a good step, but it’s not hard. You can come in with little prior schooling and you can do it if you set your mind to it.”

To this day, Bartlett is still a vital part of his grandparents’ lives. He cooks for them, does the dishes, and takes out the trash, for example.

In the fall, Bartlett will start classes at Yavapai College. In five years, he looks forward to having a career in the computer industry.

Thanks to the donation, programs such as the Camp Verde Adult Reading Program and several other programs across Arizona can further their missions.