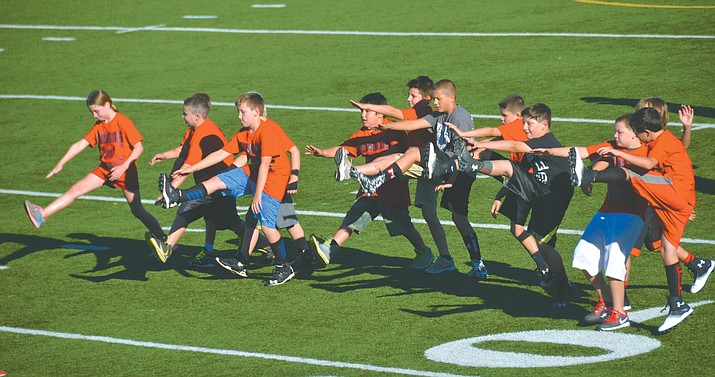 Football season is just around the corner and both Mingus Union and Camp Verde are hosting youth football camps where the kids can play with the high school Marauders and Cowboys.

The Mingus Youth Football Camp will be held Tuesday through Thursday from 5:30-7:30 p.m. The Marauder players coach at the camp.

“It’s a blast,” said Mingus football head coach Bob Young. “The kids love it. Most of these guys when they were kids they were at the camp, so they look forward. I organize it and I let the payers run it and they have a blast, they do a great job, the kids love it.”

Mingus Union senior Marcos Valenzuela said the camp is fun for the high school players because they get an idea of what it’s like for them to coach. He went to it when he was younger.

“It’s like a training camp but we’re the coaches and then coaches go to their position or whatever and coach the kids, teach them what we do here at Mingus, to prepare them, at least give them a little taste of what they’re gonna face when they get to high school,” Valenzuela said.

Camp Verde’s camp will be more informal. Last year the Cowboys had the kids go through drills but now that he’s the head coach, Jerome Rhoades is having them shadow the high schoolers.

“We’re going through our work out and we’re going to let the little guys go through with us and so they’re going to get a kind of test of what we do and the drills that we do,” Rhoades said. “We’re not going to get into any specifics of football, we’re just gonna kinda stay, we’re going to run some routes, maybe some slant routes, some basic things for the young guys to have fun with more than anything.”

The CV camp is free and through Camp Verde Youth Football.

The camp is Monday through Thursday at Camp Verde High School and from 5:30-6:30 p.m. Parents are asked to stay for the hour.

The Coyotes will have a registration table to sign up to play this season.

The Mingus camp is in conjunction with the youth football because they start next week too.

“We’re kinda getting the kids all ready to go for football and the little kids just eat it up, it’s a neat three days,” Young said.