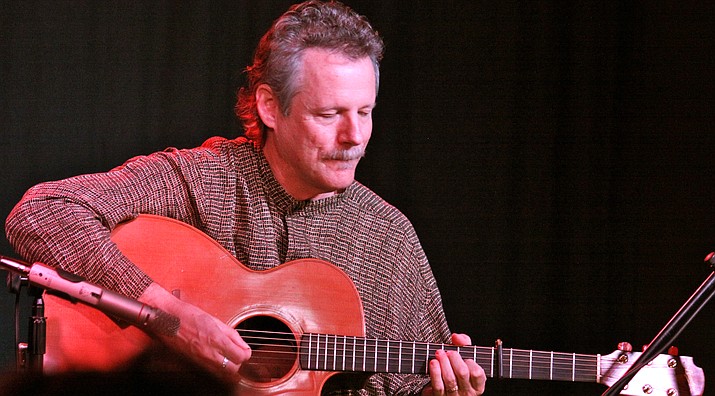 For a romantic weekend of wine and music, treat yourself to the unique, “Guitar Artistry” of Rick Cyge in West Sedona this week! Join Cyge for a dinner performance at The Golden Goose American Grill, 5:30-8:30 p.m., where he appears Thursday July 20, Sunday, July 23 and Tuesday July 25, 2017.

Cyge, a versatile composer and arranger, has turned his love of the music of the Baby Boomer era into a vast repertoire of fingerstyle guitar arrangements. He explained, “My approach is to identify the key elements of the song, the melody, harmonic structure and rhythmic style and weave these elements into a solo guitar piece that marries those elements into a single cohesive guitar interpretation. With some of the very complex pieces, such as The Beach Boys’ ‘California Girls’ where so much is happening, I incorporate the use of a phrase sampler to layer some of the elements to get them all together– too much to pack into a single guitar part! I also create rhythm sections for some pieces by assembling bass, drum, and percussion parts to embellish the arrangements and record these using keyboards in the studio. I use these mixes to accompany my live performance of those pieces, i.e., Steely Dan’s ‘Rikki Don’t Lose That Number.’ In the end, it e That Number. In the end, it’ at Seriese r the eyes! travels to every corner of the globe. is always about the solo guitar arrangement of the song.”