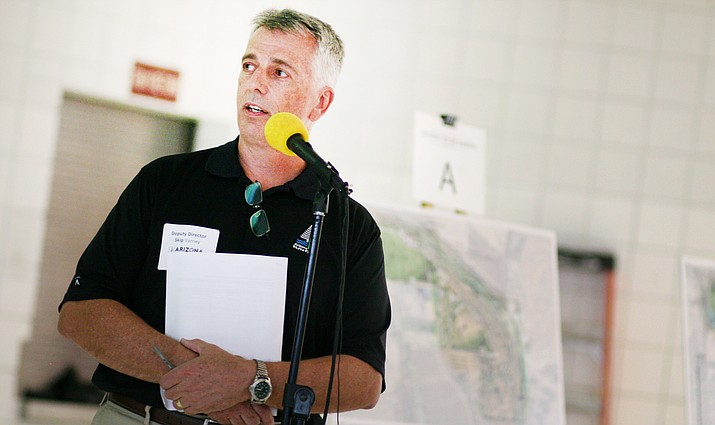 CAMP VERDE – From start to finish, the creation of Rockin’ River Ranch State Park is expected to be a four-step process.

From planning, to design, to construction, to the celebratory ribbon cutting, the folks down at Arizona State Parks and Trails are working with a $4 million budget and approximately 21 months before their targeted grand opening sometime in December 2018.

Monday at Camp Verde Middle School’s Cafeteria/Multi-Use Facility, Arizona State Parks and Trails sponsored the second of three public open houses to solicit feedback from the general public and to unveil three preliminary plans based on input, as well as the “realistic access and limited facilities that can be developed with the funds designated in the Executive Budget,” according to a pre-meeting press release from Glenn Schlottman, chief of marketing for Arizona State Parks.

“There were a lot of good public comments, which is what we really wanted,” Schlottman said of Monday’s meeting. “Ultimately we hope it provides insight so we can move forward with the best plan for the community.”

The presentation included three preliminary designs which included a combination of cabins and recreational vehicle camping spaces that total 70, as well as 45 group camping sites and 15-20 tent camping sites.

Following a presentation from members of both Arizona State Parks and from developers Logan Simpson, attendees were permitted to solicit questions to be answered by the evening’s presenters.

Several of the attendees asked about plans for Salt Mine Road, which Camp Verde Economic Development Director State Ayers referred to as a “dirt road that got paved.”

“It’s very clear that there’s concern about the road,” Ayers said during Monday’s question and answer session. “But from my perspective, the road’s already a problem and the development of the park will only speed up the improvements that need to take place.”

Addressing expected increase in traffic on Salt Mine Road, Ayers said that the new park “would affect this road minimally, compared to the other effects on the road. If anything, the park will mitigate the fixes.”

Though Salt Mine resident Mike Noble asked “why wouldn’t you fix Salt Mine Road before doing the park?”

In a letter, Salt Mine Road resident Mike Noble told Monday’s presenters that there is “insufficient information available for comprehensive public comment by our community.”

This is why Noble requested a “45-day public review period of all the information gathered by the State Parks and the Technical Advisory Committee.”

Though Noble’s letter was not addressed in the question and answer session, it stated a request of acknowledgment of “your agreement with this delay by July 21.”

Camp Verde resident Tami Woodward, who also attended the June 1 meeting, said she attended Monday’s gathering in part because she wanted to know whether the questions she raised the previous month had been answered.

“They did write down a lot of my concerns, and I appreciate that,” Woodward said.