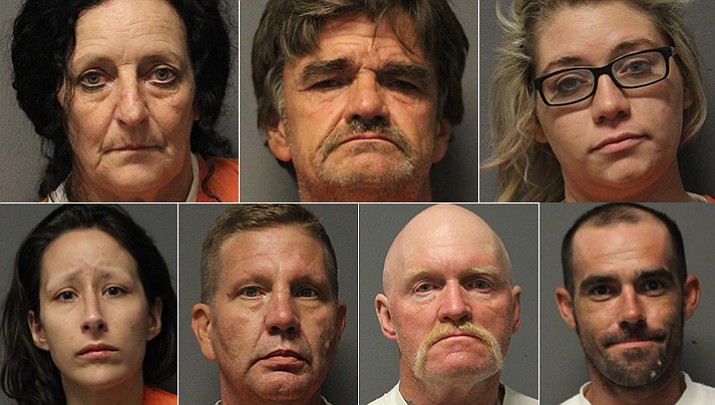 VERDE VILLAGE – Seven people were arrested when the Partners Against Narcotics Trafficking Task Force served a search warrant July 18 in the 3300 block of East Colorado Drive in Verde Village.

During the search of the residence and trailers, P.A.N.T. detectives located usable quantities of methamphetamine and black tar heroin, according to a Yavapai County Sheriff’s Office news release.

Over the past few weeks, P.A.N.T. detectives received several tips regarding the residence and its occupants being involved in drug sales, said YCSO Media Relations Coordinator Dwight D’Evelyn in the release.

As a result, D’Evelyn continued, detectives developed probable cause and obtained a search warrant for the location to investigate illegal drug use and drug sales occurring from the home.

At approximately 5:45 a.m., P.A.N.T. Detectives, along with YCSO personnel, served the warrant and found 10 people in the residence and trailers on the property, stated the release.

Based upon the investigation, seven of the 10 individuals detained were arrested, and booked at the Camp Verde Detention Center for the following charges;

Kelsey Guerrero - Possession of Narcotic Drugs and Possession of Drug Paraphernalia. She has since been released pending further investigation.

Carl Mattson - Possession of Drug Paraphernalia (two counts). He has since been released pending further investigation.

Eric Hawley - Possession of Drug Paraphernalia. He has since been released pending further investigation.

Yavapai County Developmental Services was contacted in regard to the overall condition of the residence and responded to assess the structure, according to the release.

“A determination was made that the structure in its present state was not suitable to inhabit and notice was served precluding anyone from living there if and/or until repairs are made,” said D’Evelyn.