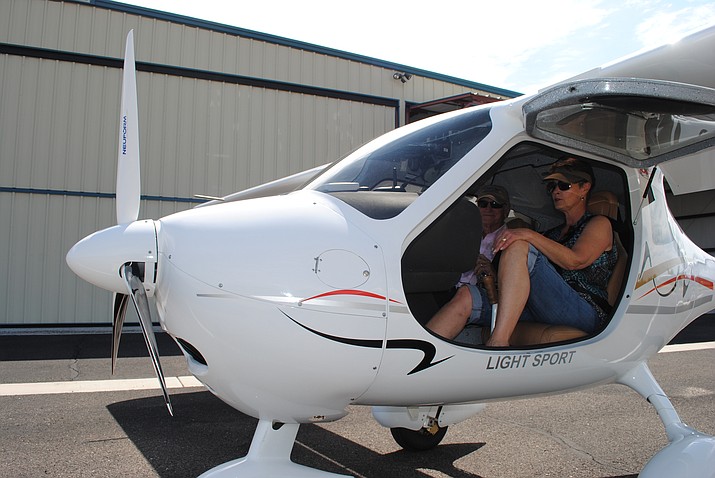 She is the first to take advantage of KAS’s flight training service at the Cottonwood Municipal Airport.

The Verde Valley has been without a flight training facility for years.

“Not only is there now such a training facility, it is much more affordable than traditional flight training has become,” said Sid Lloyd, manager of KAS.

It was flown from its previous home in California to Cottonwood by Kalabus.

“The CTLS is an amazing aircraft to fly,” said the flight instructor.

“It has a full glass cockpit and flying it is a pleasure. Not only is it easy to fly, it has great performance. On the way home, it flew at 115 knots (132 mph) while burning only 4.5 gallons an hour of premium auto fuel. That’s almost 29 mpg. Better than most cars.”

All CTLS aircraft come standard with an instantly deployable ballistic parachute. In the unlikely event of an emergency, said KAS, the pilot can deploy the rocket-assisted parachute which then lowers the entire aircraft slowly to the ground.

It’s light at 800 pounds and much quieter than you would expect.

The FAA created a new, simpler and more affordable aircraft category called Light Sport Aircraft, according to KAS. Along with the new category of aircraft comes a new type of pilot certificate: Sport Pilot.

A ‘certificate’ is what the FAA calls a ‘license.’

A Sport Pilot certificate requires the applicant to pass an FAA knowledge test, acquire a minimum of 15 hours of dual instruction, accomplish five hours of supervised solo flight, and pass a check ride test. This is half of what is currently required for a full Private Pilot certificate, said Lloyd.

• Carrying only one passenger

• No flying in controlled airspace without an instructor’s endorsement

No FAA medical certification is needed to obtain a Sport Pilot certificate, but a valid driver’s license is required.

Lloyd said potential pilots also have the opportunity to continue training and earn their Private Pilot certificate in the CTLS from KAS.

KAS said existing private pilots can also fly Light Sport Aircraft such as the CTLS as Sport Pilots without a medical certificate if they have not had their last medical revoked by the FAA.

“This opens up aviation to thousands of existing highly trained but ‘rusty’ pilots,” said Lloyd.

The company offers a 5-hour minimum transition flight program for such pilots, which then qualifies them to rent the Flight Design CTLS from KAS. Lloyd said they must also have a current flight review and renter’s insurance if they want to rent from KAS after their transition training.

Lloyd added that if there is sufficient interest they may acquire additional CTLS aircraft.

Lloyd started KAS this year, and shares his love of aviation with his wife who is also a pilot. They have lived in the Verde Valley for more than 10 years.

He would like to see a Young Eagles program begin in Cottonwood to introduce and inspire kids in the world aviation.

KAS is a full-service Light Sport Aviation center focusing on Rotax equipped Light Sport Aircraft. The company is located 668 S. Airpark Road, Hangar No. 3 at the Cottonwood Municipal Airport (P52) and can be contacted by appointment at www.kestrelaviationservices.com or 928-239-4101.