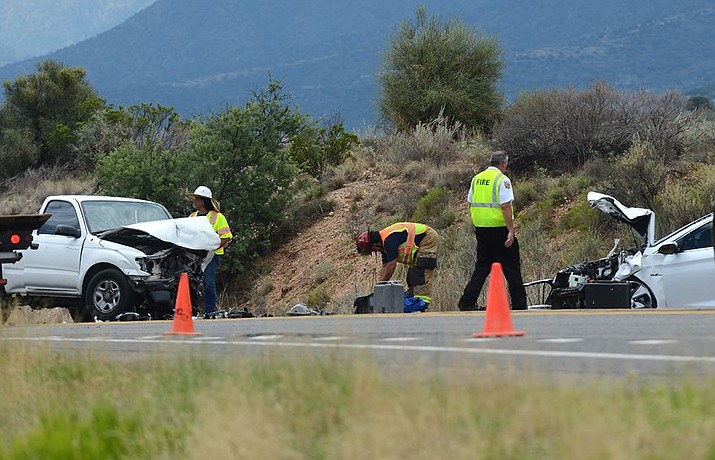 This is the second accident today on SR260 between Cottonwood and Camp Verde. It was just before noon and one person was flown from the scene by medical helicopter. It was near the entrance of Thousand Trails and closed traffic to one lane. The earlier accident was on the Cottonwood side of Cherry Creek Road around 6:30 am, just down the highway from this accident. VVN/Vyto Starinskas

Cottonwood- Cottonwood Police, Fire and EMS responded to a head-on collision on SR 260, near Thousand Trails, around 11 a.m. Tuesday.

The accident resulted in SR260 being shut down at times, or limited to one lane for both directions to share. The highway was finally reopened around 3 p.m., said Sgt. Monica Kuhlt in a news release.

Police said the investigation revealed that a 23-year-old Cottonwood man was traveling northbound when he crossed into the southbound lane, colliding head-on with another vehicle.

He was driving a white Toyota pickup, according to the release, and suffered minor injuries.

The victim, a 71 year-old man from Flagstaff, was flown to Flagstaff Medical Center.

A sample of the man’s blood was taken, and will be sent to the lab for analysis.

“The investigation will be sent to the Yavapai County Attorney’s Office for review once the test results are returned,” said Kuhlt, adding that he could face criminal charges.

The 23-year-old was discharged from the hospital. The 71-year-old victim’s condition is not known.