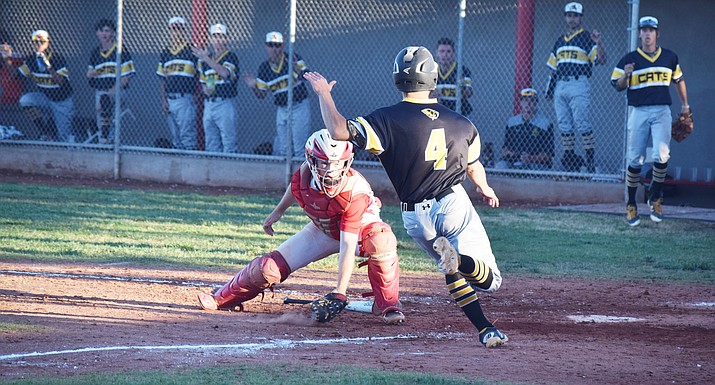 Mingus Union senior catcher Gus Henley prepares to tag out a base runner. Henley was named to the 4A North Arizona Baseball Coaches Association all-star team and first team All- Region after hitting .405 this season. (VVN/James Kelley)

“It’s always an honor because there’s a lot of kids in 4A and to be selected by the coaches to participate,” said Mingus Union baseball head coach Bob Young. “We’ve been lucky at Mingus because we’ve had one or two kids every year probably for like the last 15 years that played in that game. Good for them.”

“We never talk about individual awards, but that’s just something that when you do well, those things happen,” Young said. “You’re always hoping to get more guys on and I thought some other guys deserved it but it’s hard when you got seven teams in the region and you got 11 or 12 guys battling for first team.”

Mingus Union finished tied for first in the Grand Canyon Region, with a 9-4 record, with Coconino and Flagstaff and won the region title by virtue of their 11-5 4A record. The region had five teams in the top 17 in the state.

“It was a battle,” Young said. “It was the best the north has been in a long time, for sure.”

Young won region co-coach of the year with Daniel Vandervalk of Coconino.

“That’s a reflection, that’s a team thing I got that because our team did well,” Young said. “That’s totally a team thing, none of that stuff matters to me. That’s just good for the team.”

Young said there weren’t any surprises with the all-region team.

“The region was so even this year, there was basically a three-way tie for first,” Young said. “There’s a lot of good ball players.”