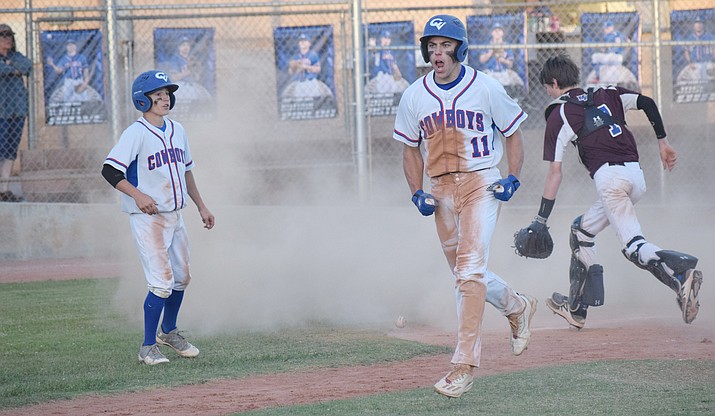 It was an up and down season for Verde Valley high school sports, but it ended on a high note.

The Mingus Union and Camp Verde baseball and softball teams may have mostly felt their seasons ended earlier than expected, but they were certainly good seasons.

There was a time when all four of those teams were ranked in the top 10 in the state.

Camp Verde softball made it the furthest of the four for the second straight season. A year after making it to the Division IV state championship game, they made it to the 2A semifinals.

They did this with lots of younger players at key positions, most notably Jacy Finley taking over as the pitching staff’s ace after Taya Smith, the 2016 and 2015 Division IV Section I Player of the Year, graduated. Finley was seventh in the state in ERA and sixth in strike outs. Camp Verde went 20-9 and 9-1 in the 2A Central, winning the region/section title again and seeing 12 Cowboys honored by the Central Region, including senior Kayla Hackett as player of the year, senior Tiauana Day as region defensive player of the year and Henry Smith as coach of the year.

The future is certainly bright for Camp Verde softball but their back-to-back state final four appearances is already something to applaud.

Their softball counterparts at Mingus Union also had an impressive season. Yes, they lost in the first round of the state tournament, but they went 22-10 after going 6-20-1 record and 0-9 at home in 2016.

They just lost out on the region championship, losing to Prescott by a game but two days after they fell to the Badgers 10-5 on the road, they pounded Prescott 10-5.

The Verde Valley coaches downplayed winning coach of the year because “it’s a team award.” Yes that’s true but without quality leadership it’s easy for

Mingus Union sophomore Maddie Bejarano celebrates a lead off double at Salpointe Catholic in the first round of the state tournament. Mingus Union went 22-10 after going 6-20-1 in 2016. (VVN/James Kelley)

even the best teams to falter.

Impressively, the Verde Valley high school baseball and softball teams had three region coach of the year winners, Bob Young for Mingus baseball and Will Davis for Camp Verde baseball in addition to Henry Smith. Regardless of whether or not you think a coach of the year award is just a team award, three out of four is impressive.

In fact, the only one that didn’t win it, John Brown at Mingus, had the best case. His side had that great improvement and the winner, Randall Bryan of Prescott lead a team that should have done well in 2017.

The Badgers were 16-6-1 in 2017 and 22-9 in 2016. Meanwhile in Cottonwood, the Marauders’ program completely turned around. They had two region player of the year awards, had two players named all-4A and five Marauders were all-region.

On Mingus’ baseball side, the Marauders also fell in the first round but also had a great regular season. Mingus Union held on to win the brutally tough 4A Grand Canyon. The region had five teams in the top 17 in the state and its last two teams, Bradshaw Mountain and Mohave, weren’t even that low, coming in at 25th and 35th respectively. The region was so good that Mingus Union, Coconino and Flagstaff each finished with 8-4 Grand Canyon records, with the Marauders taking the title thanks to their 11-5 4A mark.

All in all, the Verde Valley teams won three of four region championships, with the Mingus Union softball only finishing in second by a game.

Finally, there’s Camp Verde baseball. The Cowboys’ season had all the makings of a dream season. Led by 10 seniors, Camp Verde stormed out to a 25-3 regular season record, the No. 4 seed in the state tournament and the region championship.

They suffered a heartbreaking upset loss to No. 13 Miami by a strike after the Vandals got a game winning 2 RBI double with two strikes and two outs in the top of the 7th inning and then by a few feet when senior John Castillo hit the ball to the warning track in dead center with a man on and two outs.

All season long the Cowboys talked about going deep in the tournament with that core group that played together since tee ball.

The season is not a failure just because of one bad game — no actually one bad inning — they did rally from a 6-0 deficit against the Vandals.

Baseball and softball are unforgiving sports and the format for 4A and 2A was single elimination. You can’t really have a seven, five or even three game series when you have 16 teams in a tournament, but had the postseason been double elimination, Verde Valley teams would have done even better.

Throughout the whole of the season the Mingus Union and Camp Verde baseball and softball teams had 2017s to remember.

It was a pleasure to cover those four teams, the only thing I missed was getting to see the baseball teams play each other the softball teams square up.

That would have been quite a sight.