Camp Verde school board considers, does not offer revised contract to superintendent 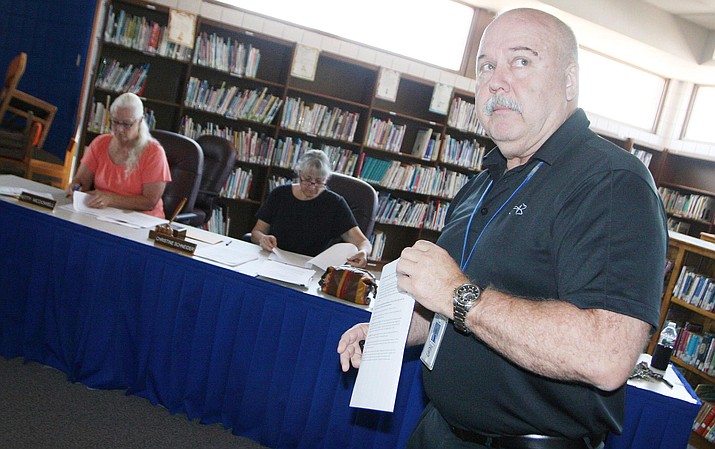 Each time, the board has collectively returned from executive session without continuing the discussion.

And without offering Dr. Goodwin a contract to extend his stay at Camp Verde Unified.

“Sorry, I have no comments at this time,” board member Helen Freeman said.

Though Dr. Goodwin has a contract with the district through June 30, 2018, a new contract would surely be a sign of the district board’s appreciation of its top-ranked employee.

Not only is Dr. Goodwin still working under his original deal, but the board did not request Tuesday that continued contract discussions be placed on a future agenda.

Tuesday, the board met in two executive sessions for nearly three hours, first to discuss the completion of the superintendent’s annual comprehensive/formal evaluation, then to discuss offering him a revised contract effective immediately – which would have eliminated his original deal and replaced it with an updated contract.

Once the board returned from executive session, board President Christine Schneider asked that an item be placed on the agenda that would allow the board to schedule a work session to revise the Dr. Goodwin’s evaluation tool, as well as review the “Governance Team Handbook and work on Governing Board communications,” according to a draft copy of the minutes from the Tuesday meeting.

Schneider also asked that the CVUSD governing board “return and report to the Superintendent in regards to his evaluation” at the Tuesday, June 13 regular meeting.

“Building a relationship with the Yavapai-Apache Nation” is one area that Goodwin said he is most proud of in his two-year tenure at Camp Verde Unified School District.

“It’s a group of individuals building a positive relationship where it helps the kids directly. I want to help them as much as I can.”

“To do even more would be very positive,” Dr. Goodwin said.

CVUSD will post the agenda at least 24 hours prior to the meeting at http://campverdeschools.org/board-agendas.