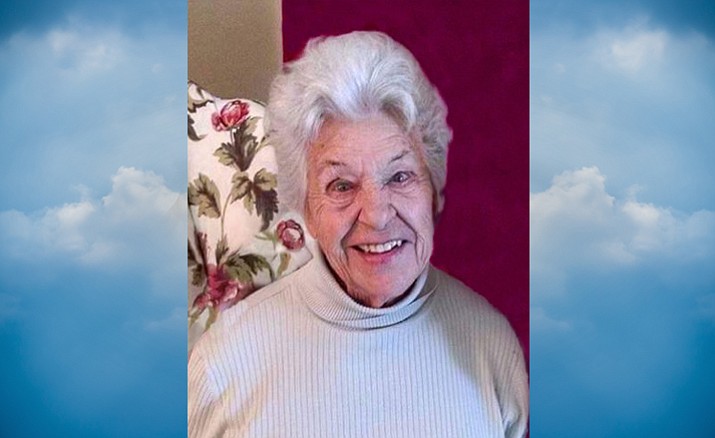 Jeanne A. Jones, 91, a 40 year resident of the Verde Valley, died peacefully at her home in Cornville, on Sunday, June 4, 2017, surrounded by her family and her loving dog, Scruffy.

Born in Eagleville, Missouri, on September 14, 1925 to McKinley and Goldie Allen, following her graduation from Ridgeway High School, she moved with her family to San Francisco, to support the war effort. Jeanne lived in San Francisco with her loving sister-in-law, who became her best friend for life, and who is still residing in San Francisco.

It was on one of their many adventures with Glad, that Jeanne met her future husband to be, Gordon Jones, who was recuperating from injuries he suffered from WWII.

Jeanne and Gordon, who retired from the Air Force as a Lt. Colonel, were married for 58 years, until his death in 2005.

Mom was quick to laugh, had a wicked sense of humor, played a killer game of bridge, liked people and had many friends. Her neighbors of the last eight years were especially supportive to Mom as her eye sight failed and she very much appreciated all their kindnesses to her and her companion, Scruffy. Her bridge group was the highlight of her week and she loved her bridge friends, whose friendship over the many years was treasured. It was a great sadness to her to have to give up bridge last year.

“Nana” as she was known by her grandchildren, was a wonderful mother, grandmother, wife, sister, daughter and friend. She lived abroad with her family while Gordon was in the military and loved to travel. Jeanne enjoyed other cultures and beautiful places and things. She was a great story teller with a fabulous memory.

She is survived by her son Jon (and his partner Linda Gray), of Sedona and her daughters,

Cindy (and Scott) Robinson of Cornville, and Megan (and Ken) Peterson, of Kansas City, Mo, and her brother Robert (and Anna) Allen of Eagleville, Mo. She has nine grandchildren, and seven great grandchildren.

She was preceded in death by her son, Jary Jones of Santa Rosa, New Mexico and her grandson, David Jones.

Per Jeanne’s wishes, there will be no funeral services. However, if you would like to make a donation in her name, Jeanne would have been tickled if it was to Planned Parenthood or any other organization that will make the world a better place.

SHE WAS QUITE A CLASSY LADY!!!