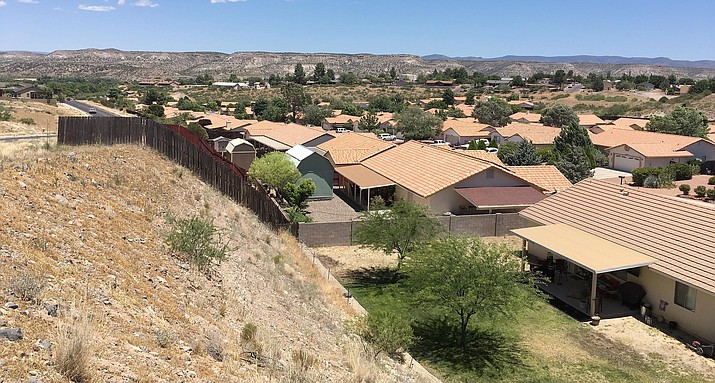 According to a report by Homesnap Real Estate, Camp Verde’s real estate market has slowed the past 30 days, as “sales fell 5.6 percent, to 17 homes sold over the last 30 days.” Pictured, Camp Verde housing community known as The Cliffs. (Photo by Bill Helm)

For one thing, many home escrows are for 45 days.

“A 30-day change in real estate is not really important,” Weems says. “A downturn this month could be a big month next month. Six-month trends give you a feel for what’s actually happening in the market.”

Though she specializes in luxury estates, waterfront, view homes and golf communities in the Verde Valley, Weems and her husband live in the Camp Verde home her parents bought in 1969.

As she looks at recent sales in the Verde Valley, Weems points out something simple. The more homes sold one month, the fewer homes are available to sell the following month.

“The biggest thing is a lack of inventory,” says Pete Roulette, owner/broker of Montezuma Realty in Camp Verde. “If we had more homes, we’d sell more homes. More people looking than there are people selling.”

“Sedona and the Verde Valley very much follow the national trends, maybe a little bit behind,” Jacque Weems says. “Sales have recently slowed because much of the inventory has sold.”

According to a report by Homesnap Real Estate, Camp Verde’s real estate market has slowed the past 30 days, as “sales fell 5.6 percent, to 17 homes sold over the last 30 days.”

Of the Verde Valley’s communities, only Sedona has seen an increase in the past 30 days, as the number of home sales in the 86336 zip code market increased by 6 percent to 53 homes.

Other Verde Valley communities examined in the Homesnap study include Clarkdale, with sales decreasing 30 percent the past 30 days; Cottonwood with no change in sellers; Cornville with a “confirmed upward trend of new sellers listing homes, including 16 over the last 30 days, and sales that have fallen to 14 in that same time frame;” and Beaver Creek with “home sales [having] remained unchanged from the prior period and once again six homes were sold.”

“And they’re not always attached to your community,” he says.

Says Jacque Weems, people are hesitant to believe that the sale will go through – until it actually does go through.

“I don’t believe there’s enough faith in the resurgence of the golf course at this time,” Weems says. “There have been so many false starts, it’s not funny. [The community] is going to have to see something before they believe it.”

As for her, Weems says that Beaver Creek is the place she sees her “best investments.”

“They tend to go lower in value,” she says. “But always they are the most affordable. When the market has an upset, that’s an area where people can afford.”

Just as Jacque Weems says about 30-day studies, so does Dan Mabery.

“The market is hot,” Mabery says. But why?

“Possibly pent-up demand since the recession,” he says. “The average sales price in the Cottonwood has doubled in the past six years.”

According to the Sedona Verde Valley Association of Realtors MLS – Multiple Listing Service – the median price of a single-family dwelling in Cottonwood in 2012 cost “a little over $100,000,” Mabery says.

So far this year, the median price of a single-family dwelling in Cottonwood has cost “a little over $200,000.”

What’s the next step to buying a home?

Prospective home buyers – and home sellers – can digest all this information, but then what?

Dan Mabery says that prospective home buyers should talk to a lender and get prequalified.

“If [the buyer] finds a house that they like, most sellers won’t even entertain an offer unless the buyer is prequalified,” Mabery says.

Once the buyers have been prequalified, next step is to verify the home’s worth.

“Trust your realtor. Or get an appraisal, if it’s a seller.”

“It costs nothing,” he says.