Rep. Thorpe seeks restrictions on where college students can vote 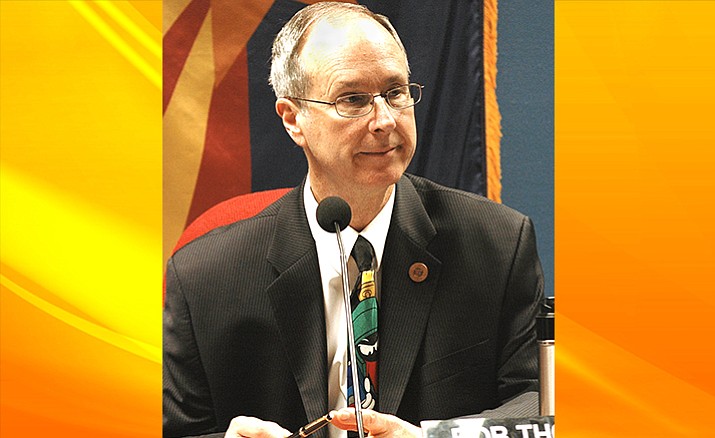 PHOENIX -- Calling the practice unethical, a Flagstaff Republican lawmaker wants to bar college students from voting where they may live most of the year.

The proposal by Rep. Bob Thorpe would put a provision that students who want to vote would be able to do so only by signing up to get an early ballot from the voting precinct where they were living before they went to college, presumably the address of their parents.

More to the point, they would not be able to use their college address. And that would apply not only to those live in a campus dormitory but even those who have off-campus apartments or houses.

Thorpe, whose district includes Northern Arizona University, said the students who vote in elections -- including his own -- are really just part-time residents. More to the point, he contends allowing them to participate in local elections means they “unfairly influence local elections.’’

“These students do not influence the elections within their home communities, where their family and neighbors live, but instead they dilute the votes of the local full-time residents within the college communities,’’ Thorpe said in a prepared statement. “This legislation will prevent unfair influence in local elections and unethical voter recruitment efforts.’’

A similar proposal by Thorpe introduced earlier this year died when Rep. Doug Coleman, R-Apache Junction, refused to even give it a hearing in the House Government Committee which he chairs.

“Just the basic premise of the bill of actually saying that they couldn’t choose where their residence was, even if it was where they were living, I had issues with,’’ Coleman told Capitol Media Services.

Potentially more significant, he said Thorpe’s legislation made what he saw as an unjustified conclusion that a student’s residency is with mom and dad.

“I think residency is where a person lives,’’ Coleman said.

Potentially seeking to blunt that objection, Thorpe’s new version has an escape clause of sorts.

Under his proposal, a student could vote where he or she attends college by obtaining a state-issued photo ID, presumably a driver’s license, with that school address. But that option would be available only to those who live off campus; students in dormitories would get no such right.

Thorpe refused to be interviewed about his plan, agreeing to provide only written responses, though a House Republican spokesman, to inquiries about the legislation. Asked why he believes the legislation is necessary, Thorpe wrote back saying only that it would “end the disenfranchisement of permanent residents by temporary students who influence their local elections.’’

But Thorpe declined to respond to other specific questions about motive, though he did acknowledge he wants to keep students from influencing the outcome of elections.

There is some evidence that has been the case.

Most notable was the 2016 vote by Flagstaff residents to eventually move the city’s minimum wage to $15 an hour, a measure he opposed.

It passed by a margin of 54-46 percent citywide. But in multiple areas around the NAU campus the margin was closer to 2-1, and even approached 3-1 at two precincts which include parts of the campus -- enough to blunt the vote in some residential precincts where it failed.

Thorpe himself also did not do well in the three precincts in and immediately around the campus.

Out of 1,280 ballot cast, he got 324 votes; fellow Republican Brenda Barton got 327 while lone Democrat Alex Martinez tallied 788.

But Thorpe’s lack of support was not limited to those living on and near the NAU campus, with Martinez outpolling both him and Barton in the entire Coconino County part of the legislative district. The Republicans won the general election anyway with strong support from voters in Navajo, Gila and Yavapai.

Secretary of State Michele Reagan, who is the state’s chief elections officer, was wary of what Thorpe is proposing.

Reagan spokesman Matt Roberts said students have told his boss that they “consider the place they spend the majority of their time to be their residence.’’

Even if Thorpe can get a hearing this coming year -- and get the votes in the Republican-controlled legislature -- there is another hurdle: It may be illegal.

When he unveiled the first version of his plan earlier this year, Coconino County Recorder Patty Hansen cited a case that went through federal courts in Texas involving Waller County. That ruling, upheld without comment in 1979 by the U.S. Supreme Court, said students can choose whether to register to vote where they live while at school or at their prior home address.

Thorpe, in his statement about the proposal, said he will work with Reagan “to find a solution to these serious problems.’’