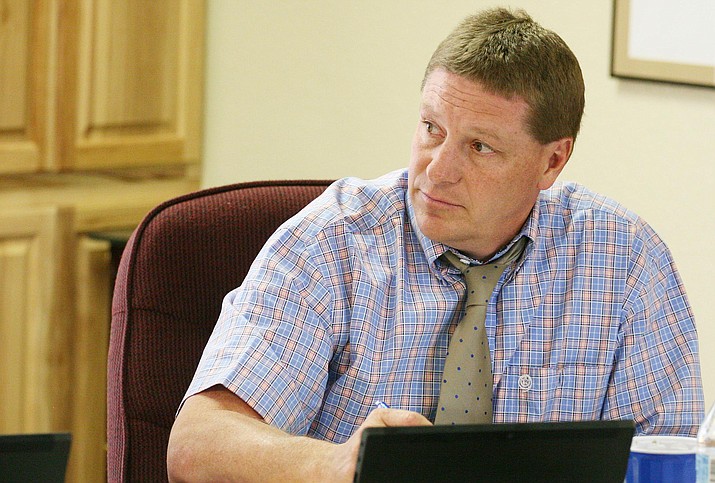 According to Valley Academy Superintendent Bob Weir, the next step in the mediation process between V’ACTE and Mingus Union High School District is to supply data to be analyzed for a solution. (Photo by Bill Helm)

COTTONWOOD – Though mediation talks between Mingus Union High School District and Valley Academy of Career and Technical Education are according to Mingus Union board president Anita Glazar “moving forward,” the Mingus Union governing board could extend its relationship with current interim Superintendent Dr. Jack Keegan through the next school year.

With incoming Superintendent Dr. Penny Hargrove also tasked with being the school’s principal for 2017-2018, the board could offer Dr. Keegan a one-year consulting services contract to support Dr. Hargrove “in the transition of leadership, to provide continuity and to assist with ongoing V’ACTE lawsuit mediation and [Intergovernmental Agreement] development.”

Tuesday, the Mingus Union High School District governing board discussed the proposal at a special study session. According to Glazar, Dr. Keegan has “expertise with the V’ACTE [mediation].”

“We want to continue with his services,” Glazar said. “So [we would like] to keep him as a consultant.”

At a cost of $100 per hour, not to exceed $10,000 for the school year, Dr. Keegan would be asked to update Dr. Hargrove on all current district programs, advise on budget and resource allocation matters, assist with the mediation and Intergovernmental Agreement development, provide procedural guidance as needed, and serve as a resource to Dr. Hargrove, as well as administrators and the governing board.

Dr. Keegan would perform the duties as needed either in person, by telephone or via email.

According to the proposal, “it is anticipated there will be more intensive service needs initially and then diminishing needs during the term of the agreement.”

The first mediation session between representatives from both Mingus Union and Valley Academy did not result in resolution, which Glazar said “disappointed” her.

“I think the full amount needs to recovered. But I’m just one board member,” Glazar said about the $393,986.05 notice of claim the Mingus Union attorney filed against Valley Academy for money the district said it was underpaid from fiscal years 2012 through 2016. “I believe the taxpayers meant for that money to come to the school.”

But Glazar also said that Valley Academy’s efforts in mediation, specifically the efforts of Superintendent Bob Weir, have allowed both sides to “move through the challenges.”

“I’m sympathetic for them,” Glazar said. “[V’ACTE is] having to deal with hard things. They still have to deal with past issues.”

Though Glazar calls herself an “impatient woman,” Mingus Union Business Manager Kirk Waddle said that both sides have made a “little bit of progress.” Which he said he feels “good about.”

According to Weir, the next step in the mediation process is for each side to supply data to be analyzed for a solution.

“If it shows that we owe money, then we should [pay them],” Weir said. “If not, they shouldn’t be entitled to it.”

On June 27, the Mingus Union school board is expected to consider – and approve – the consulting services contract with Dr. Keegan. The Mingus Union High School District will post the agenda at least 24 hours before the meeting’s expected 6 p.m. start time.