What's in your basket this week? 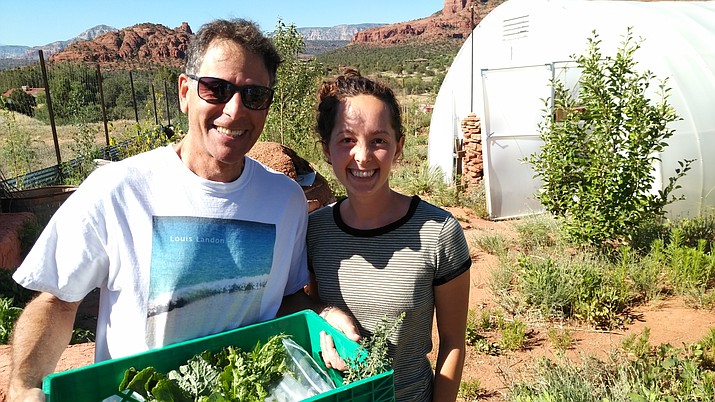 It’s that time of year when we have the luxury of purchasing quality food, grown in an organic and sustainable manner, from farmers we know or get to know face to face. It’s right in our backyard!

Just this past week, we picked up our basket at the Verde Valley CSA (Community Supported Agriculture) which has been running since 2007. In our basket were quality braising greens, broccolini, cabbage, carrots, kale, radishes, summer squash and Vidalia onions. Before the growing season we commit to pay the growers for 22 weeks of mouth-watering produce. Check out info@verdevalleysca.com. Another nearby CSA and new this year is the CSA at Verde Valley School. It began its 20-week season on June 5. When we arrived for a visit, VOC resident Louis Landon was picking up his weekly share (See photo.) In his basket were celites (a wild Mexican spinach), lettuce mix, carrots, snap peas, thyme, purple leaf plums and turnips. Michael Hasloop, the school’s “farmer”, has developed an amazing garden growing every vegetable imaginable-many heirloom- and all started from native seed. Recently, in addition to several existing fruit trees, an orchard was begun. 67 fruit trees were started from bare root. All are thriving due to and his staff’s attention AND the nutrients from 100% composting of all the school’s appropriate kitchen waste. Michael and his assistant, Desiree Rue-Pastin were so kind to explain the plan of the gardens that began in 2010. One-third of the produce is used for feeding students and staff at the school; one-thirds goes to local restaurants and markets such as the CSA and the Sedona Farmers Market at Tlaquepaque; one-third is donated to the Yavapai Food Council’s Bountiful Kitchen. Want more info? Contact desireepastin@vvsaz.org.

In anticipation, we shopped the grand opening of the pop-up Farmer’s Market at The Collective on Wednesday, June 14. It was an exciting and affirmative experience. Organized by Molly Munoz of Da’ Nede Farms, 30 vendors displayed their wares. There were goat milk and lavender products, barbeque sauces, honeys, breads, baked goods, fresh produce (bins nearly emptied), fresh eggs (sold out in first hour, but orders taken) and more. After tasting, we purchase peppered cheese curds (made by true Wisconsinites!) , fresh beets and organic beef patties from Plowing Ahead Ranch in Camp Verde. This market will be available every other Wednesday from 2-7. Cash in small bills appreciated.

• There is excitement at the Outlet Mall -- The Majestic and The Speakeasy will occupy the theatre space. We were given a tour -- the interior is nothing like we have known from past iterations. Check out www.majestic-speakeasy.com. It’s not a terribly interactive site yet, but you will get the idea. The theatre/dining complex is due to be open mid- July to early August. There will be dining only as well as theatre dining Fridays thru Sundays.

• Rocky RD Ice Cream Company has been open from 11-8 daily for a month at The Collective, next to Miley’s. There are luscious flavors of ice cream and sorbets like roasted strawberry, peanut butter, vegan chocolate almond and mango colada. All are made in-house in small batches. So are the waffle cones. See the company’s Facebook page for all 20 flavors.

• The 4th Annual Canned Sedona Chef Competition kick-off was held June 11. The charities that will be sponsored by four winners in the elimination round were announced: N. AZ Restorative Justice; Verde Valley Sinfonietta; The Homeless Alliance and Pets Return Home. Mark your calendars for Sunday August 27 for that competition. It will be held at RIOT (Rendezvous In Old Town), corner of 89A and Main in Cottonwood.

• Though we did not make Lisa Dahl’s 2nd anniversary of Mariposa, we did dine there this past month. Wow, what a fantastically beautiful and accommodating structure and grounds. Suzie’s Halibut and Jeff’s Mixed Grill were delicious and the service was impeccable.