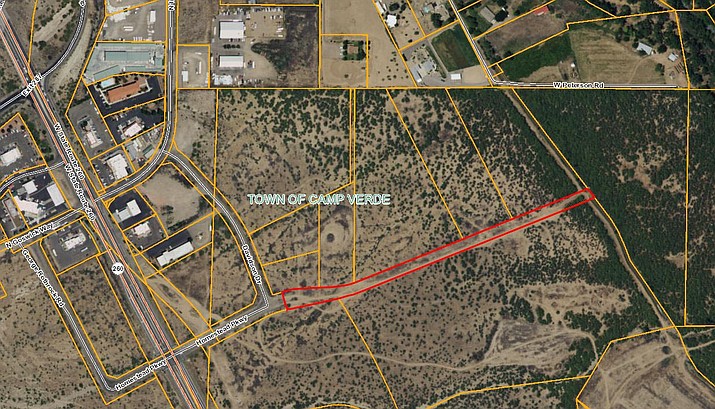 In red, the proposed extension of Homestead Parkway in Camp Verde heading northeast from Davidson Drive. (Photo courtesy of the Town of Camp Verde)

Wednesday, Arizona Department of Transportation notified the Town of Camp Verde that it had received a $231,013 Economic Strengths Program grant for the construction of the road’s extension project.

Including the $24,500 Arizona Game and Fish Heritage Grant the Town of Camp Verde received in March, more than $255,000 is now available toward the road’s construction, Ayers said.

Simonton also donated a 2.69-acre access parcel – an easement – to the Town of Camp Verde. This parcel will be the site of the extended Homestead Parkway. That donation to the Town had been conditional on council’s agreement to find funding to – and facilitate the Homestead Parkway extension.

With the grant, Homestead Parkway will be extended to the eventual site of the new Verde Valley Archaeology Center, as well as a new Homestead Park and the Simonton Ranch Business Park.

In a letter to the Arizona Commerce Authority, Camp Verde Mayor Charlie German wrote that by developing a paved road to the Simonton Ranch Business Park, as well as a water line and placing a conduit for future fiber optic expansion, the business park would be “in an excellent position to change perceptions about doing business in rural Arizona.”

The agreement to build an access road to the land played a role in the transaction. According to Simonton, the eventual construction of the road’s extension “will enable the Verde Valley Archaeology Center project, which National Geographic has already identified to be a world class destination once completed, to move forward.”

Simonton also said the road would “provide Town residents with much needed access to the Verde River and the proposed 80-acre Town Park along the river. It will assist construction of affordable housing and business park development along Homestead Parkway, which is now proposed due to the road improvement.”

According to Camp Verde Public Works Director Ron Long, the next step is “planning and scheduling the construction work.”

“We are all excited about the great news,” Long said. “We have been waiting to get the official word on the grant, and now that we know, we need to meet internally and discuss how [and] when we are going to approach this project.”

Ayers wrote in the grant application that the Homestead Parkway Extension Project would construct an 1,800-foot paved extension of Homestead Parkway with curb and gutter, plus a 1,600-foot, 12-inch waterline and 1,800 feet of 4-inch conduit for a future fiber optic line.

The application also stated that the “infrastructure will benefit approximately 53 acres of private land and an 80-acre publicly-owned park property.”

According to the original agreement, the Homestead Parkway extension project is to be completed by July 1, 2018, Ayers said.