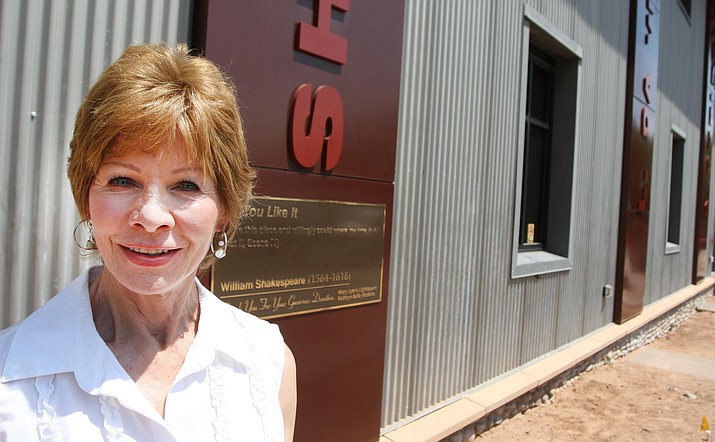 The Friends of the Camp Verde Library have taken on the library’s panel and plaque author project. Pictured, Jeannette Teets, president of the Friends group. (Photo by Bill Helm)

CAMP VERDE – Two years before the Town of Camp Verde opened its new library, a group of volunteers realized that one day, the Citizens Committee for the Camp Verde Library would be out of things to do.

Camp Verde Community Library Director Kathy Hellman knew that one day, “the CCCVL would go away,” said Jeannette Teets, president of the Friends of the Camp Verde Library.”

The purpose of the CCCVL was to raise money for the new library. Once the new two-story, 17,000-square-foot library opened, they had met their objective.

So the Friends of the Camp Verde Community Library have taken over fundraising duties.

Steve Diacik with the Town’s Maintenance Department, with the new vending machine at the Camp Verde Community Library. The Friends of the Camp Verde Library bought the machine with money raised through the library’s book nook. (Photo by Bill Helm)

“When [CCCVL] disbanded after the library was built, the Friends took over a lot of their future responsibilities and plans,” Teets said.

Recently, they purchased a vending machine “to better serve patrons, volunteers and staff with drinks and snacks,” Teets said.

So stays at the library won’t be cut short due to hunger or thirst, the new machine is owned, operated and stocked by the Friends group and will be stocked with 13 different types of drinks, as well as chips, candy and also “more healthy items, like apple slices, cheese and crackers, not just sugar stuff,” Teets said.

To keep things simple for both patrons and the Friends group, each item will cost $1.

“This will be a continual money maker for the Friends, since we will be purchasing and stocking items ourselves,” Teets said. “So we’ll be able to make a little profit.”

Of course all profits go back into the business, which is the business of providing aide for the library.

The Friends’ things-to-do list includes buying a digital sign/marquee outside the library, a self-checkout system, as well as continuing to raise money for the annual Summer Reading Program.

In March, the Friends group donated $1,000 to each the children’s library and the teen library for their SRP.

“Anything the library can’t pay for that isn’t in the budget, that’s what we’re here for,” Teets said. “We don’t want to have money sitting around.”

Anyone who has been to the new library has seen the long, vertical panels on each of the building’s long sides. Eleven panels, each will eventually have the name of an author, as well as a plaque fabricated with a quote from that author.

“Not until the library was built did we realize there was no other group to take on the panel and plaque project,” Teets said. “So it fell upon us.”

The 11 authors’ names are already on the panels, the next step, Teets said, is finding donators to facilitate the addition of the fabricated plaques.

Thanks to the estate of Mary Lyons Lightbourn and Kathryn Belle Watkins, Shakespeare’s quote was recently added to his panel.

“We have chosen several quotes from each of those authors that donors can choose from for their plaque,” Teets said. “Or they can suggest a different quote from that author.”