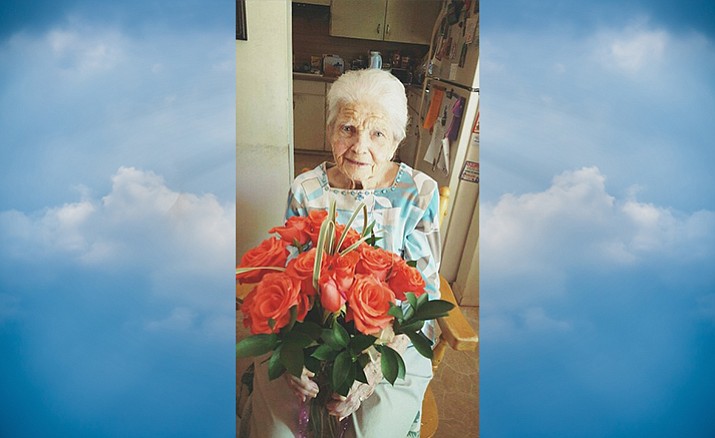 Margaret Catherine Derrick, 97, of Cornville died on June 21, 2017. She was born on May 18th, 1920 in Prescott, Arizona to Chancy and Catherine Montgomery.

Shortly after her birth her mother passed away due to child birth complications. Her father couldn’t raise three small children and run the V-V Ranch in Rim Rock so she was raised by her aunt in Anaheim, California until she was 18. She attended Saint Mary’s Academy High School.

After graduation she moved back to the Verde Valley and worked at the Rim Rock Dude Ranch and the telephone office in Jerome until she married Jim Derrick on August 24, 1940 and moved to Clarkdale.

At that time, married women were not allowed to work at the telephone company so she was forced to resign. Margaret and Jim had five children, three born at the hospital in Jerome and two in Cottonwood.

In 1955 they moved to Cornville where Jim built their house along Oak Creek and she lived there until her passing.

Margaret loved her family and always looked forward to large gatherings. It never mattered what occasion, whether it was for birthdays, holidays, hunting and fishing trips, or any other excuse for a get together.

She loved to cook and was a prize winning cake baker. Her cakes raised hundreds of dollars for different charities and organizations throughout the valley.

In the early years in Cornville, she was a 4-H leader where she and her club members won numerous awards. She was one of the top leaders in the Arizona. After her children were raised she worked at the Huffaker chicken farm in Cornville, Robinson’s clothing store, Penn-Mor MFC Co., and Peggy’s Fashions in Cottonwood, and served on many election boards in Cornville.

She was proceeded in death by her husband Jim Derrick, parents Chauncy and Catherine Montgomery, brother Joe Montgomery, and sister Agnus Murdock.

Service will be held at the Immaculate Conception Catholic Church on Bill Grey Road in Cottonwood at 8:30 AM on Monday, July 3, 2017.