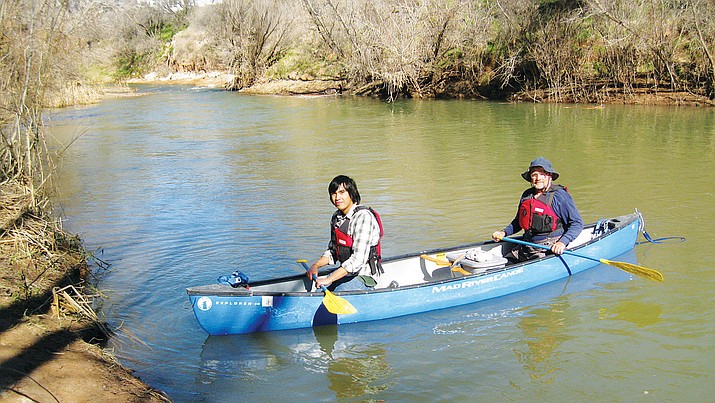 During his career as a newspaper reporter, Steve Ayers once wrote that John Parsons “more than anyone, is responsible for transforming the Verde (River) from a gravel-pitted, land-filled, orphaned waif to the thing of charm and beauty it is today.”

As the economic development director for the Town of Camp Verde, Ayers is hoping Parsons’ Verde River legacy will be memorialized by naming the town’s newest riverfront park after him.

On July 19, Ayers will propose to the Camp Verde Town Council that the town’s 30-acre parcel at the Verde River and Interstate 17 officially be named “Parsons Park.”

Several years ago, esteemed Northern Arizona geologist Wayne Ranney told Ayers the Verde Valley needed to do something to honor John Parsons for all he had done for the river.

“It came up soon after we started of doing our Verde River recreation master plan,” said Ayers. “We had talked with a lot of people about what we wanted to name this park and we were not hearing any great ideas. I always remembered what Wayne (Ranney) had said, so when I tossed (Parsons’) name out it was met with unanimous approval. Parsons Park. The name stuck throughout the planning process, so now I want to make it official.”

In a Facebook posting late last week, Parsons said from his summer home in Idaho, “Words simply cannot express how much this means to me. When you first mentioned the idea December 1, 2016, I was absolutely stunned and speechless. Since then I’ve often thought that I was just dreaming or something. To know that it might become reality is amazing and so special.”

To which Ayers replied, “You deserve every bit of recognition you can receive given all you have done for the river.”

A 2006 editorial in The Independent/Bugle noted that in the early to mid-1980s, Parsons was asking anyone and everyone to take a canoe ride with him down the Verde River. It wasn’t so much an attempt to share his favorite pastime as it was to create a growing awareness that something was not quite right with the Verde River. Parsons’ concerns were legitimized in 1987 when the non-profit organization American Rivers included the Verde in its annual list of the most endangered rivers in America. The culprit in those days was the sand-and-gravel industry. The abuses were such that former County Attorney Charles Hastings took legal action against one of the mining companies. Eventually, federal laws were enacted to protect the river from such mining abuses.

As Ayers noted in a 2011 story in the Independent/Bugle, in the early 1980s Parsons was a self-described “yahoo” with little care for anything but the next adrenaline-pumping rapid.

But, he was also highly observant and noticed that in comparison to other rivers he had run, the Verde River was choked with debris and its waters were constantly turbid.

“At high flow, when the snow melts, all rivers are turbid. But when a naturally flowing river reaches base flow it should be crystal clear. The Verde didn’t do that,” Parsons said.

To some, Parsons became a thorn in the side of river-based sand-and-gravel companies. To others, he was educating the masses that something the community took for granted needed closer examination: Sand and gravel companies, dredging the river, constantly churning up sediment and generally operating as though they owned the river.

“I asked myself, how could anyone think they can set up an industrial operation in the middle of a free flowing natural stream? It flies in the face of the Clean Water Act. I made it my goal to get them out,” Parsons said in 2011.

He first began educating the community from a canoe he constantly carried with him atop an old Forest Service utility truck. Parsons would take just about anyone who would lend a listening ear on one of his canoe rides down the Verde River. He especially made that invitation known to public officials and others who carried some degree of influence.

Parsons used the canoe rides to share his concerns about the unnatural influences damaging the river. He also allowed it to be a quiet time as he frequently said no one can tell the Verde’s story like the river itself.

“I always viewed myself as the middleman, helping people get introduced to the river so the river could speak to them and tell its story in its own way, in its own time, straight to their hearts,” Parsons said in a 2011 story in The Verde Independent/Camp Verde Bugle.

Parsons eventually sought political office in various county, state and federal elections, hitting the campaign trail in that old Forest Service truck with the canoe on top. He always ran on the minority ticket in traditional Republican strongholds, knowing full well that he had little chance to win. But as a skilled orator, Parsons keenly understood the campaign trail would give him captive audiences. He used it to full advantage to explain the plight of the Verde and all natural free-flowing rivers in the Southwest and the kinds of legislative measures needed to protect them.

It was during this time that Parsons discovered an otherwise obscure commission, operating under Arizona State Parks, called the Arizona Outdoor Recreation Coordinating Commission. One of its primary responsibilities was doling out money from the State Lake Improvement Fund.

SLIF money came from boat registration. The only problem was the commission was using all the money it received, for projects that benefited powerboats.

Following a failed run for a state legislative post, Parsons went down to the capital, signed up as a lobbyist and successfully ushered a bill protecting the rights of paddlers to cross private lands on the surface of flowing streams.

Then he managed to wheedle his way into the signing of the bill, where he met then-Gov. Evan Mecham.

“I simply asked if he would appoint me to the commission,” Parsons said. “I figured I had nothing to lose.”

Mecham appointed Parsons to the commission.

Using the power of the office and the funding he shamed the other commissioners into allocating for river access and other programs, he began bringing anyone and everyone to the Verde to see its charms as well as what the sand-and-gravel operators were up to.

On Sept. 30, 1989, the Environmental Protection Agency issued a Cease and Desist Order to all sand and gravel companies operating in the river. It was also the same day a new celebration was launched at Dead Horse Ranch State Park -- Verde River Days.

That was the same year The Verde Independent/Camp Verde Bugle published a front-page story on Parsons, dubbing him “Mr. Verde River.”

Similarly, he was affectionately called “Ole Man River” in a special tribute given him by the Yavapai County Board of Supervisors in 2000. The county proclamation singled out Parsons’ river advocacy and his “long-standing collaboration and inspiration to multiple government agencies at the local, state and federal level.” Former District 3 Supervisor Chip Davis said, “John Parsons was the Verde River before the Verde River was cool.”

On Facebook this past week, the movement to name the 30-acre Camp Verde parcel in honor of Parsons has met strong support. Commenters have said Parsons is an “ideal choice” and “no one is more deserving of this honor than John!”

In another Facebook posting, Ayers told Parsons, “You were the guy who put the ball on the tee to begin with. We are all still playing the game you started.”