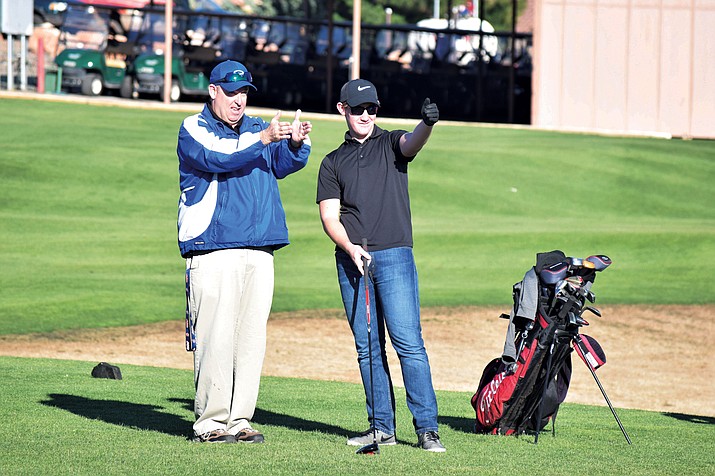 Camp Verde golf head coach Christian Fuller called 2017 a rebuilding year and the Cowboys haven’t gotten as much time on the links as he would have liked, but he is nonetheless excited about the season.

The Cowboys open the season with a young squad, mostly sophomores and freshman but Fuller sees promise.

“I think all of these kids have a great deal of potential,” Fuller said. “They’re all super kids, do well in school with their academics and they’re all very reliable and I just think it’s going to be a fun year, I do.”

The Cowboys’ home course is the Verde Santa Fe Golf Course in Cornville.

Sophomore Kolby Hodges starts the season as the Cowboys’ No. 1 seed.

“He actually played varsity last year as a freshman, so I think that he has a great deal of potential as well,” Fuller said.

Camp Verde junior William Webster tees off at practice on Wednesday at Verde Santa Fe Golf Course. Webster is one of three upperclassmen for the Cowboys this season. (VVN/James Kelley)

“She is really improved over the years and I think she’s going to be very solid for us this year,” Fuller said. “She’s a four-year senior, so I’m really proud of her.”

Fuller also praised the Cowboys’ juniors, Nick Daniels and William Webster, saying that he expects them to do well this season and that they have a lot of potential.

An issue the Cowboys ran into in preparation for the start of the season is the loss of time on the links, like when they were unable to practice on Monday and Tuesday because of rain.

“Due to weather and other circumstances, we have not been out as much as I would have wanted before we play our first match,” Fuller said.

The Cowboys also usually only get to practice around an hour and a half minutes at the start of the season because it gets dark around 5:30 p.m.

“It’s just that time of year when it’s tough to get in as much work as possible, with the limited daylight and often we have weather issues the first three or four weeks,” Fuller said. “As you know, we’ve had more precipitation this year in Arizona than, I don’t know, in the last 50 years or something like that. So it’s been a little bit challenging, but I think that the kids are going to pull through and we’re going to have a fine season.”

Camp Verde’s schedule of matches is pretty familiar, playing the teams Fuller said they usually have played in the seven years he has coached the Cowboys. This year they add Kingman Academy, a charter school to the slate.

“A lot of the teams are teams that we’ve kinda formed a relationship with over the years, Sedona, Northland Prep, Chino Valley, Wickenburg,” Fuller said.

The Cowboys feature three freshmen: Royal Doungeva, Damon Conway and Kendall Peterson and they are new to golf, but Fuller likes their potential.

“The three freshmen are the kids that really are not familiar with the game of golf, but they’ve shown an interest in learning the game,” Fuller said. “Honestly, over the last two or three weeks, I can already see that they’re really picking up on their swing very quickly and that they are really starting to enjoy the game and I’m pretty confident that all three of them will stick with it and continue on with the program as sophomore, juniors and seniors hopefully.”