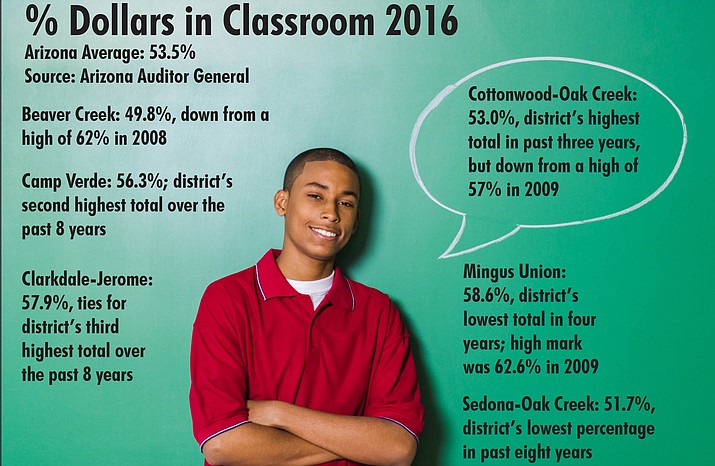 VERDE VALLEY – Wednesday’s report from the Arizona Office of the Auditor General stated that for every dollar spent to educate K-12 Arizonans in fiscal year 2016, 53.5 cents went to the classroom.

But that figure is “not a valid measure,” says Kirk Waddle, business manager at Mingus Union High School District. The percent of money spent in the classroom is based solely on salaries, associated benefits and supplies.

Supplies, says Waddle, are items such as pens and pencils, erasers, paper, cue cards, staples and paper clips, items not meant to least even a year, items that cost less than $1,000.

In the past three years, Mingus Union has spent “between $200,000 and $300,000 on computers in the classrooms.” Computers – and text books – Waddle says, are “capital items” and do not count toward the Auditor General Office’s definition of classroom spending.

Last year, Mingus Union also spent “around $450,000 on new furniture for the classrooms,” which also as a capital item does not count as money spent in the classroom.

Says Kathleen Fleenor, interim superintendent at Clarkdale-Jerome School District, a “more realistic picture” would be to consider the combination of instruction and student support.

“All of those funds go to help students achieve,” Fleenor says.

According to David Snyder, director of Business Services for the Cottonwood-Oak Creek School District, student support means counselors, librarians, nurses, paraprofessionals, psychologists, and speech therapists, all which are “geared toward the student.”

“Couldn’t that be considered dollars spent for the classroom?” Snyder asks.

Dollars based on student count

Though line items such as administration, plant (facility) operations, food service, transportation, student support and instruction support are also not part of the 53.5 cents spent in the classroom, they are instrumental in how school districts meet the needs of their children, said Karin Ward, superintendent of Beaver Creek School District.

“Electric bills, gas bills, transportation, contracted people. Those don’t go into classroom spending,” Ward says. “We still have to heat the classrooms, air condition the classrooms. Feed the kids. Keep the buses running, liability insurance, cleaning supplies, health licensing. We still have to pay for that all. We only have so much money based on our student count.”

“As for instruction, we are [sixth] in our peer group in classroom percentage spent in support of education,” Dr. Goodwin said. “In plant operations, we are well below our peer average of $157 verses $270 square footage per student. In food service, our cost is $2.85 per meal versus $3.40 per meal in our peer group. Our transportation costs are about average with our peer groups. Most of us have large regional areas requiring longer bus routes.”

Though school districts are not required to provide transportation, Waddle asks: “Could you imagine schools in the Verde Valley not busing?”

Regardless of expense classification, districts receive money from the state based on Average Daily Membership, defined as the average student enrollment each day based on the first 100 days of the school year. The vast majority of revenue that comes to schools is based on the fruits of the ADM, Waddle says.

Though in the past school year, the passing of Proposition 123 added another $250 million for the state’s schools.

Whether a classroom has 10 students, 20 students, 30 students, “regardless of the amount of kids in the class, I still have to heat the classrooms,” Ward said.

Due to a grant awarded to Mingus Union High School that pays the cost of a campus psychologist, spending on both student support and instruction support increased at the district by 0.7 percent from 2015 to 2016, Waddle said.

“This was new money for Mingus and a great benefit,” Waddle said. “It is just mathematics that change the percentages in the pie chart.”

The 53.5 percent average spent by Arizona K-12 schools in the classroom increases to 67.4 percent with the inclusion of student support and instruction support, according to Chuck Essigs, Director of Governmental Relations, AASBO, Arizona Association of School Business Officials.

Essigs also stated that the percentage “for these same categories in FY 2015 was also 67.4 percent.

Going back to fiscal year 2001, the first time that the Auditor General completed this type of study, the percentage for instruction, student support and instruction support was 68.3 percent, Essigs also stated.

AZ schools classroom spending at lowest level in 16 years
Mingus Union slams C-OC budget
Prop. 301 shows up in schools
How pie is divided not as important as ‘size of the pie’
In Arizona, 54-cents for every $1 budgeted for education actually makes it to the classroom
Event Calendar