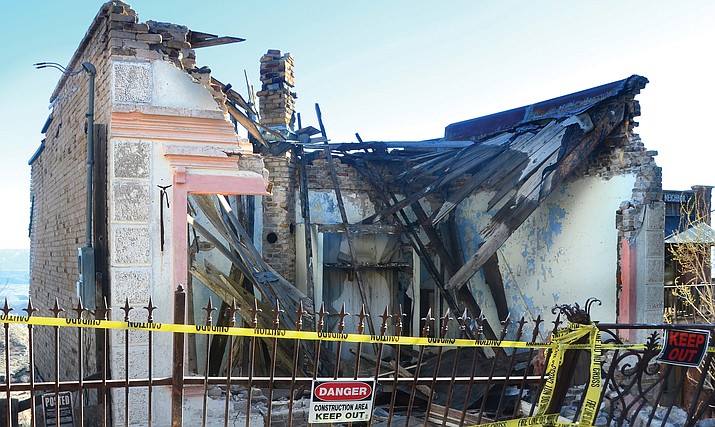 The collapse of the historic Cuban Queen Bordello should be a wake-up call for town officials over the degree to which Jerome can flex its municipal muscle with properties that fall into such disrepair.

In most cases, the town has relied on the Jerome Historical Society to come to the rescue of such buildings; a classic case in point was the society’s recent acquisition of the Jerome Sliding Jail. In the case of the Cuban Queen Bordello, the historical society likewise attempted to purchase the building, but never could come to terms on price with the owner. Jerome Police Chief and Historical Society President Allen Muma said the Cuban Queen Bordello building had been neglected for 18 years.

At some point in those nearly two decades, the town should have stepped in and demanded the owner do the right thing. Unfortunately, it’s not clear if Jerome even has such authority. Town Building Inspector Barry Wolstencroft said Friday that Jerome’s ordinance authority on such structurally challenged buildings applies to those “open to the public, a commercial building, and has definite structural issues that may pose a life safety concern, the owner of the building will be contacted. We can use the International Property Maintenance code as a resource to gain compliance. If the owner refuses to comply, then the citation process begins.”

Elsewhere in the Verde Valley, town officials take it a step further, and Jerome should follow suit.

In Clarkdale, for example, Senior Planner Beth Escobar explained the town has “regulatory authority to monitor the structural integrity of buildings, to require repairs or to condemn the building as unsafe … Our general process is to send a notice of code violation to the property owner who has 30 days to respond. Upon hearing from the property owner, our Building Official Paul Grasso will work with the owner to address the violations. If it is a case of an unsafe building, the building would be posted as unsafe and hazards would need to be immediately addressed. Issues that are not addressed in a timely manner by the property owner are referred to our town prosecutor.”

Camp Verde has a similar plan -- with ordinances to back it up -- under the “Unsafe Structures and Equipment” section of the town code.

In Camp Verde’s case, explained Town Manager Russ Martin, the emphasis is on working with the property owner to solve the problem. The town, he said, is “generally … patient if we can be.” If that doesn’t work, the “court could determine fines to compel compliance up to emergency removal if dangerous enough,” said Martin.

In Jerome, the challenge has always been finding 21st Century solutions to buildings that are a century old. Building practices from 1900 hardly meet 2017 code requirements, and Jerome officials have met considerable resistance in the past trying to enforce modern-day building codes in the town.

As for the town flexing its muscles on such issues, if Jerome does not has sufficient ordinance authority to keep such buildings from crumbling into decay, it’s high time the town gets with the program.