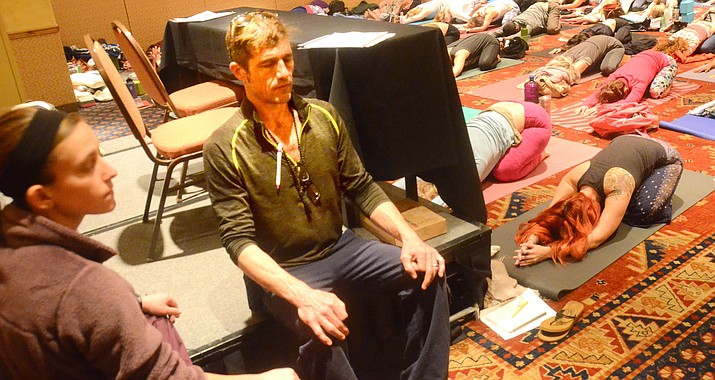 Marc Titus takes a quick moment from his hectic schedule to meditate before speaking to the “Yoga for PTSD, immersion for Yoga Teachers and Service Providers” training class on Thursday at the 2017 Sedona Yoga Festival. It is one of dozens of trainings offered during the 2017 festival. VVN/Vyto Starinskas

SEDONA -- I didn’t know which Marc Titus I was going to get.

The yoga instructor full of hugs and encouragement and love who inspires others to change the world.

Or, will Marc be uneasy, angry, snap, yell-at-me, not even know who I am?

Luckily, I got the Marc who said he want to erase the stigma of Post Traumatic Stress Disorder and keep people from suffering like he has.

Titus only realized he had the PSTD several years ago, even though the trigger may have occurred eight years prior.

That is when Titus sat in a helicopter with a body bag resting on his feet of a fellow forest firefighter he had just retrieved from a helicopter crash.

In 2008, nine firefighters died in the Shasta-Trinity National Forest in California when the helicopter they were traveling in crashed during duty.

Titus said he was working as the manager overseeing 25 helicopters and 250 people on a heli-base complex fighting the huge complex fire. The crash was not on the fire Titus was fighting, but farther north, he said.

Several days after the crash, Titus said he volunteered to be the first to retrieve one of the fellow firefighters from the helicopter, which crashed and landed on its side and caught fire.

“I’m not going to pick someone to do this, I’m going to do this” he told his boss shaking his head.

Titus said he never really processed the event at the time, stressing that he will never forget his brother firefighters and the incident was very difficult for him.

Several years ago, Titus said he began to snap at people, became angry, and at times was lost in himself. He was in such a nasty place that he would not recognize people and he knew he needed help.

He had no idea he had PTSD from the incident until two or three years ago.

This week, Marc Titus is helping teach 90 certified teachers “yoga for PSTD” at a four-day class at the Sedona Yoga festival.

This is one of dozens of classes, trainings and workshops at the growing festival held in the Village of Oak Creek, which Titus founded with his wife, Heather Titus.

“Yoga for PTSD, immersion for Yoga Teachers and Service Providers” is aimed at giving yoga instructors the tools to work with PSTD in veterans, firefighters, EMTs, emergency room and pediatric doctors, sexual abuse victims, trafficking victims and anyone who has PTSD symptoms and wants to learn relief, Titus said.

Titus also spent last Tuesday teaching his yoga for PSTD to a group of EMTs in Flagstaff.

But the Sedona Yoga Festival is where Titus believes his yoga teachers have gathered to learn to spread the tools of PSTD treatment.

Titus said he wanted the Sedona Yoga Festival platform to do “good,” so four years ago the SYF began to offer this training. While everyone is aware of the yoga festival, the message to the world was: “Did you know that PTSD and trauma is a big problem in this country?”

PTSD for one person may be a sexual assault, or a veteran returning for war, or an abusive parent and emergency room doctor or something much less complicated, Titus said. It’s very individual, he added.

The symptoms of PTSD become serious when a person finds that they cannot control themselves, Titus said. Sometimes it appears as depression, sometimes depression can be caused by PTSD, he said.

“If you find yourself unable manage your emotional reactivity, unable to manage your physical reactivity,” he said. “You’re angry, there’s something you have to look at. I say recognize what is happening.”

The PSTD for yoga offers tools to control the symptoms and prepare for the effects, he said.

When Titus is “on,” he is running the Sedona Yoga Festival, juggling the opening ceremony Thursday, running the operations, food venders and dealing with a hundred other details. He welcomes a new SYF participant with a smile and quickly runs off to take care of the next detail. Then he stops to quickly meditate and rejuvenate with one of the classes.

Then he relates his battle to control his daily frustrations around him at the festival to the PSTD participants and how he coped with them as the day went on, never missing a moment to use himself to teach a lesson.

Titus said no one should live in the way he did before he sought treatment. That is why he is so interested in helping people.

Gina Garcia and Melissa Leach from the Baptiste Foundation were there to help Marc and Heather on Thursday to teach the PTSD class.

The Baptiste Foundation in California uses PSTD training and self-care workshops to help firefighters, EMTs, Veterans and other people to anticipate and deal with PSTD in the workplace, explained Leach.

Rescue workers need to deal with PSTD in themselves and recognize that there is a lot of “hopelessness in the PSTD community,” explained Leach. Those working the traumatized have to be “positive” or they can’t help. That’s where yoga comes in.

“They are going to learn effective tools for managing stress and creating healing and resilience in the body and the mind and the spirit,” he said, “and to be able to teach others.”

It’s more than yoga, as it deals with breathing, relaxation and getting rid of the stress, Titus said. Yoga is part of that, but people have to first understand the symptoms and causes of PSTD.

Titus said PSTD symptoms became worse at a bad time because he was on the campaign trail with his father-in-law Bernie Sanders when he was running for president last year.

Heather Titus is Sanders’ daughter and they were traveling as a family on the campaign trail.

Titus said he was in a secret service car and in the campaign’s plane when he began feeling really bad.

Luckily he was only with family members, but at times didn’t recognize people when they came up to him.

Eventually he came out of that awful place and calmed down, he added.

“Yoga allows one to sit in stillness and watch the thoughts go by,” Titus explains. “It’s more than postures, meditation and relaxation. Yoga allows us the ability to step away from bad thoughts and allow them to pass.”

“Post Traumatic Growth is now what Titus focuses on, he said. Leaving his PSTD behind. Processing his trauma, applying the healing and moving into the future.

Even though Thursday was a good day for him, even this interview made him a little uneasy, he said.

So even reading this story may make him uneasy.

But Marc wants to get the word out about PSDT so others won’t suffer like he had to.

He wants to remember his fellow firefighters.

And it’s part of the Sedona Yoga Festival’s training.