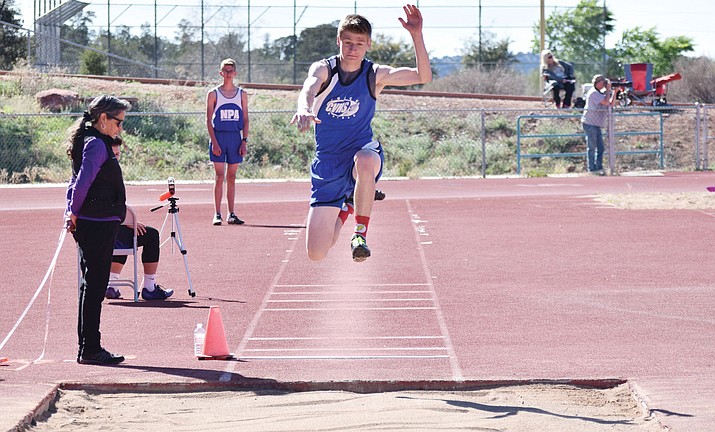 Camp Verde junio Nate Schultz tallied a provisional state qualifying mark at the 13th Annual NPA Skydome Classic at NAU. He was an automatic qualifier for state in the triple jump and finished ninth in the high jump.. (VVN file photo)

The season is young for Camp Verde track and field, but the Cowboys already have automatic state qualifiers and provisional qualifiers.

The Cowboys opened the season at Wickenburg and then competed at the 13th Annual NPA Skydome Classic at NAU.

Junior Nate Schultz finished second and became an automatic qualifier in the triple jump with a 41’3.75”, which was a personal record by a foot. Junior Bryanna Truett tied for seventh in the high jump with a leap of 4’8” a PR by three inches to punch a ticket to state.

“The second meet at the Sky Dome, the results in a few cases were really, really surprising,” said Camp Verde head coach Mike O’Callaghan. “I mean we had two kids qualify for state under the automatic qualifying standard, which I wasn’t quiet expecting this early but we’ll take it.”

Schultz was also a provisional qualifier in the long jump, 19’1”, he finished eighth there and ninth in the high jump.

“It was cool, I didn’t qualify automatically last year, made it provisionally but a lot of it goes to coach for just giving me drills to do in the offseason and stuff,” Schultz said.

Sophomore Chris Holdgrafer was a provisional state qualifier in the triple jump with a 37’11.25”, which was eighth. He also finished third in the 60-meter hurdles.

Senior Alana Neary and Truett were provisional state qualifiers in the triple jump. If there isn’t enough automatic qualifiers, provisionals got to.

O’Callaghan said all the Cowboys’ provisional qualifiers would have made it to state last year so he expects them to in fact make state.

Truett was seventh in the high jump, 16th in the triple jump and 18th in the 60-meter hurdles.

Truett said she liked competing the Skydome, the Cowboys’ one indoor meet of the year.

“It was pretty nice because there was no wind and there wasn’t really any weather because it was inside but I think it kinda helped that it was all inside so for the jumps and stuff it was qualifying, so the wind didn’t mess with the qualifying,” Truett said.

Freshman Valeria Pasos-Cruz dropped her mile time by about 25 seconds from Wickenburg to NAU.

O’Callaghan said the meet at Wickenburg, where they traditionally open the season went well and wasn’t as windy as it usually is.

“For our first meet, we had some good performances,” Wickenburg said. “We had several of the athletes who jumped or threw or ran at or near the best they’ve done in the past. So to start the season off that well is of course great, because that means that you’re going in and the kids are already geared for it.”

This is O’Callaghan’s first season as head coach after years as an assistant. After two seasons as head coach, Michel Prow resigned in the fall.

O’Callaghan said being head coach means he’s less hands on with the athletes but he is coaching the jumpers this season. He said previous administrative work that he did for former head coaches Lori Showers and Prow helped him out.

Not as much hands on coaching but coaches jumpers

“It’s been interesting,” O’Callaghan said. “A number of things I’m doing now I had done before to help coach Showers when she was here and coach Prow.”

O’Callaghan said the girls team is really young this year.

“Overall the whole team is really young, it’s a lot of freshmen and sophomores,” O’Callaghan said. “On the girls side, the girls are ok, triple jump, hurdles are strengths. Mid distance I think we’ll end up doing fairly well by the end of the season with the group we have.”

Truett said she thinks the Lady Cowboys have a good chance of sending a lot of athletes to state.

Sophomore Joseph Jones made the two-mile at state last year.

“He and (sophomore) Brandon Cruz are returners in the middle distance that especially should run well and provide some good leadership for the team,” O’Callaghan said.

Schultz said he thinks the Cowboys will have three or four state title contenders.

“We’re pretty good,” Schultz said. “I think we’re going to have a few kids contending for that state championship.”

Up next for the Cowboys is the is the Friendship Invitational at Sedona Red Rock on March 22 at 2 p.m.

“We’re headed in the right direction,” O’Callaghan said. “We’ve got the next two weeks off, about two weeks, because of spring break, we didn’t schedule any meets but it’s time we’ll use for work, preparation for what becomes the meat of the season after spring break.”