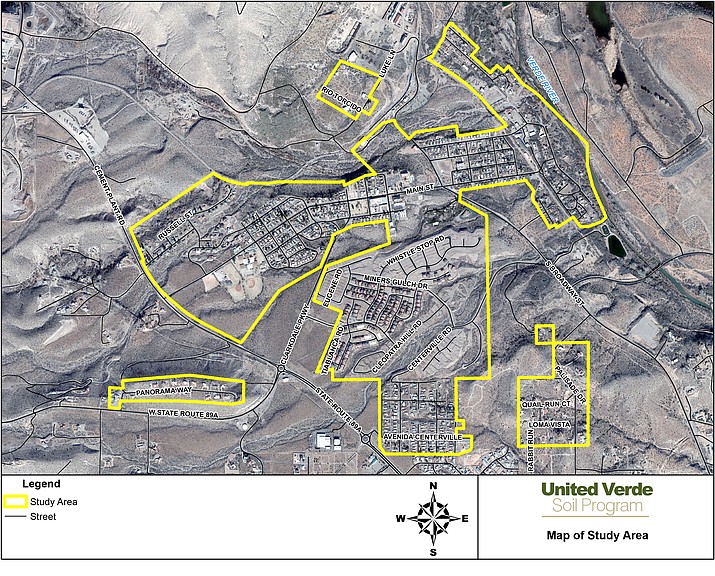 CLARKDALE – With about 80 percent of eligible property owners in the original targeted area agreeing to a soil remediation program to test, remove and replace soil affected by historical smelter operations, Freeport Minerals Corporation has announced plans to expand the program.

According to a March 13 news release from Freeport McMoRan, the original study area of Upper Clarkdale, Lower Clarkdale and Patio Park will now be expanded to include the Mountain Gate, Centerville, Palisades and Panorama neighborhoods.

The soil testing has the oversight of the Arizona Department of Environmental Quality and the Yavapai-Apache Nation Environmental Protection Agency.

The Clarkdale copper smelter was operated by the United Verde Copper Company from 1915 to 1932 and by Phelps Dodge Corporation from 1935 to 1953.

“Our initial study area focused on properties near the former smelter, including the neighborhoods of Upper Clarkdale, Lower Clarkdale, and Patio Park,” the news release stated. “As of February 2017, more than 500, or about 80 percent, of eligible property owners have signed up for the program, and we have collected thousands of soil samples from those properties.”

Based on the sampling results from the study area, Freeport has expanded the study area to include the neighborhoods of Mountain Gate, Centerville, Palisades and Panorama located south of the initial study area.

“ADEQ has approved the expansion,” the release continued. “Owners of residential and commercial properties within the expanded study area will be eligible for free soil sampling, as well as free soil removal and restoration of properties with metals above ADEQ-approved levels. Participation in the expanded study area sampling and soil cleanup is voluntary, but we encourage all eligible property owners to sign up for the program by contacting the United Verde Soil Program at 928-649-3614 or UVSP@ghd.com.”

In a March 10 memorandum, John Patricki, project manager of the voluntary remediation program, said, “Soil data obtained through the sampling of these areas/properties will be evaluated to determine if further expansion of the study area is required.”

According to Clarkdale Town Manger Gayle Mabery, Freeport officials will update the Town Council at its March 28, 3 p.m., council meeting as part of their outreach process.

“From the beginning of this process, Clarkdale has expressed concern about how the initial Study Area boundary was determined and what would trigger an expansion,” said Mabery. “We feel they have been very thorough in analyzing the soil sampling results in the historic townsite, and have used those results to make a comprehensive recommendation about expanding to Centerville, Mountain Gate, Palisades and Panorama.  They will walk the Council (and the public) through the data analysis as part of their update at the March 28th Council meeting.”

Freeport officials previously explained that the process for determining the need for soil remediation includes taking samples of 6-inch depths down to 2-feet that are then averaged together to determine whether “compounds contaminants of concern” exceed the threshold to prompt remedial work. Soil samples have been sent to an independent laboratory and tested to determine the concentrations of arsenic, copper, lead, tin, zinc, and boron in the soil.