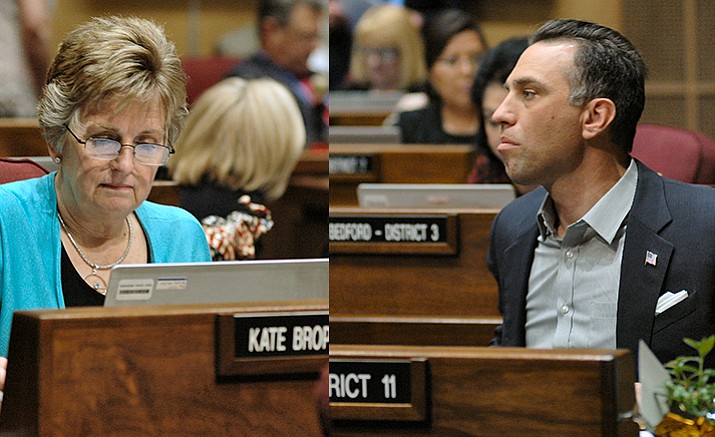 PHOENIX -- A veteran state lawmaker could face an ethics probe following comments he made last week in an unsuccessful bid to get colleagues to vote for a controversial bill.

Sen. Kate Brophy McGee, R-Phoenix, one of the targets, said Monday she believes Sen. Steve Smith, R-Maricopa, improperly questioned her motives for opposing SB 1279. That measure would have imposed certain minimum prison terms on criminals if they already were in the country illegally.

It went down to defeat as Brophy McGee and two other Republicans sided with the Democrats.

But that final vote did not occur until after Smith, in a sometimes passionate speech, questioned the reason for what foes were doing. And Smith, who had invited family members of those killed by people here illegally as well as police officers to witness the debate, suggested those voting against the measure should explain their reason to those people.

That tactic and the rhetoric bothered Brophy McGee.

“When I talk about it, I still get angry,’’ she told Capitol Media Services.

She reads the Senate rules to bar questioning someone’s motives. And Brophy McGee said she is researching what it takes to file a complaint and the process for the Ethics Committee to meet to see whether Smith’s conduct crossed the line.

Smith, for his part, insisted he broke no rules.

He said he simply asked opponents to publicly explain the reasons for the votes. Anyway, Smith said, his comments were not just aimed at Brophy McGee and fellow Republicans Bob Worsley of Mesa and Frank Pratt of Casa Grande.

“I said, ‘I don’t care who you are,’ ‘’ Smith explained Monday, saying he just wanted foes, who said nothing during debate, to explain their opposition.

“They don’t owe it to me, I guess,’’ he said. “But I would have thought they would at least owe it to the families and the law enforcement.’’

The rule says “no senator in debate shall, directly or indirectly, by any form of words, impute to another senator or to other senators any conduct or motive unworthy or unbecoming a senator.’’ It has repeatedly been interpreted to mean that one lawmaker cannot question another’s motives for supporting or opposing a specific measure.

Where Smith said he escapes any sanction is that he did not specifically say that anyone had an improper motive for opposing the legislation. Instead, he said, he simply listed a series of objections he had heard and his response to why each of them had no merit.

“I didn’t care what their reason was,’’ he said.

“I didn’t say, ‘You people aren’t voting for this because,’ ‘’ Smith continued. “What I said was, ‘Is it one of these reasons or maybe it’s a different one.’ ‘’

For example, during the debate he suggested on reason might be that foes are concerned about the negative national publicity from such a measure. That relates to the fact that there were boycotts of Arizona and a loss of conventions and tourism after lawmakers approved SB 1070 in 2010 to give police more power to detain and arrest people not in tis country legally.

“If that is your reason, because tourism might suffer in Arizona if we pass another immigration bill ... I want you to meet those family members and you tell me how many tourism dollars, if they were to be lost, is worth it to their children not being here anymore,’’ he said during the debate.

In a subsequent radio interview, Smith told radio host Chris Merrill on KFYI he has his own theory about why lawmakers voted “no.’’

“It’s 100 percent political,’’ Smith said. “Because nobody in their right mind is going to stand up and defend criminal convicted felons about why they shouldn’t be in jail.’’

Senate rules do not require an ethical violation to have occurred within the walls of the chamber. In fact, senators have been investigated for acts outside of the Senate and having nothing to do with Senate business, such as when Sen. Scott Bundgaard faced an ethics probe on an incident having to do with an alleged assault on his girlfriend.

Brophy McGee said she has no problems with Smith or anyone arguing the merits of a measure.

“I’m all for vibrant policy discussion,’’ she said. “I think this went too far.’’

“It was over the top for me,’’ he said Monday. But he told Capitol Media Services he has no interest in pursuing an ethics complaint.

The audience that Smith referred to in his bid to line up votes included the father and brother of Grant Ronnebeck who was shot and killed two years ago while working at a convenience store by someone not in this country legally. Smith in his floor speech said the assailant was out on probation for a prior crime, a penalty that would not be available under the terms of his law.