Making babies at Out of Africa
King cobras mating at wildlife park, said to be extremely rare for cobras in captivity 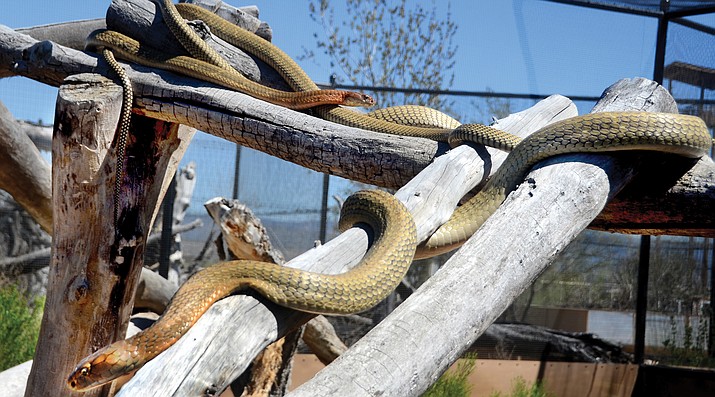 King cobra snakes Galaxy, below, and Destiny hang out at the Out of Africa Wildlife Park in Camp Verde Tuesday. VVN/Vyto Starinskas

But if the wildlife park’s 14-foot male and 11-foot female king cobras successfully mated last week, it’s going to be big news. It’s highly rare for cobras to mate in captivity. A successful breeding would allow the park to share the offspring snakes with other wildlife parks around the country.

Zac Ala holds Destiny, a 11-foot female King cobra snake living at Out of Africa. Spring breakers visiting the park this week have an opportunity to see her and her friend Galaxy, also a King cobra. VVN/Vyto Starinskas

According to Zac Ala, the reptile manager at Out of Africa and the handler of Galaxy (male) and Destiny (female), this is the only two breeding king cobras in captivity of which he is aware. And, live to tell about it; many times, the male king cobras kill the females after mating.

It gets tricky once the baby snakes are born. They come fully equipped with venom and require special care.

However, these two king cobras have been getting along great, Ala said. “Ours love each other,” he said with relief. “He’s what she wants, and she’s what he wants.”

Both king cobras at Out of Africa previously had their venom sacks removed, which is an expensive process, Ala said.

“King cobras can be gentle giants,” Ala said, even though they are the longest venomous snakes in the world. Ala had no problem picking up both snakes and carrying them and placing them on a large branch for their photo opportunity.

The babies will have venom sacks and will have to be cared for with a special incubator and feeding equipment. They may be babies, but their venom is highly dangerous, he said.

Ala doesn’t know if Destiny is going to lay eggs yet, but the two snakes were observed mating last week. It takes more than 50 days to have eggs and then more than 50 days for them to hatch. There can be as many as 40 eggs, he added.

The babies can be passed along to other wildlife refuges and parks and people can learn more about the species, he said. The staff will now have to keep an eye out to see if Destiny begins to show signs of a swollen stomach to indicate she will lay eggs.

New lion cubs may be on the way

Ted, a male lion at Out of Africa in Camp Verde, has mated with two lions, Lady and Kayla, and the park is waiting to see if there will be any cubs. VVN/Vyto Starinskas

Meanwhile, Out of Africa is also keeping an eye on their new lions, Lady and Kyla, who are mating with a younger lion, Ted, said Ashton Powell, public relations director at Out of Africa.

Powell said breeding lions in captivity is much more common than king cobras. “For cobras, it’s a very big deal,” she said. “Very few people breed them at all. It’s dangerous ... they are venomous from birth.”

The three lions were brought to Out of Africa from the Lion Ranch Habitat in Las Vegas last summer and have been kept separated by a fence, but have been close enough to see each other, Powell said. “There had not been a formal introduction,” she said.

“After a little tussle, they ended getting along quite well together and mating,” she said.

Now Out of Africa staffers are watching for signs that maybe one or potentially both Lady and Kyla will show signs of pregnancy. Normally, two to three cubs are possible per litter, Powell said.

This spring has brought spring breakers and a full parking lot of visitors at Out of Africa this week.

Spring has also brought some new partnerships with Out of Africa, explained Powell. There are businesses in the area that are offering their services right out of the wildlife park.

Guidance Air has set up their bright red helicopter in the parking lot offering helicopter rides above the park, and Arizona Offroad Tours is booking ATV riders.

Jeep tours will be provided by A Day in The West, said Powell, and soon there will be horseback rides that customers can book from the Verde River Horseback Adventures.

These new adventures complement the zip line at the park, she said, adding that even though they are booked at the park, they do not go through the park itself because of sensitivity to the animals, said Powell. They run just outside the park.