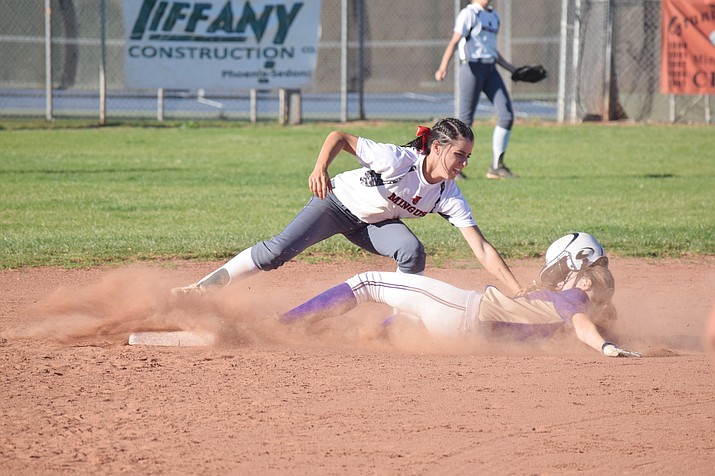 Mingus Union sophomore Maddie Bejarano tags out a Saint at second base during the Lady Marauders’ 14-0 win over Notre Dame Prep on Tuesday at home. Bejarano scored twice and had 2 RBIs as Mingus beat won two games in a row 14-0 to start spring break. (VVN/James Kelley)

Mingus Union softball prepared for their first tournament of the season with two more blow out wins.

After beating Prescott 14-2, the Lady Marauders (5-1) knocked off Saguaro 14-0 in Scottsdale and Notre Dame Prep 14-0 at home. The Saguaro win was in six innings and the NDP one in five.

Up next is the Grace Lee Haught Memorial in Payson. The tournament features 25 teams, like Westwood, Pusch Ridge, Tanque Verde, Camp Verde, St. Mary’s and Sunnyslope.

“I think we’re playing at the top of our game, right where I want to be this time of year,” said Mingus Union head coach John Brown. “We got a tournament coming up so we get to work on some things but for the first time in a long time, we’re going into a tournament hoping to win it, instead of just going there to work on stuff.”

The Lady Marauders started off spring break with the 14-0 win at Saguaro on Monday. Mingus Union led 6-0 heading into the sixth inning, where the scored 8 runs.

Junior third baseman/shortstop Nikki Zielinski went 4-for-4 with 4 runs and 3 RBIs and senior utility player Morgan Mabery was had 2 hits, 4 runs and an RBI.

“Saguaro is an interesting game, that’s a really good team,” Brown said. “We struggled with them at the beginning, we had to scratch for runs and then we just turned it up a notched and played really well and nothing against them, they did a great job, they’re a great team we just played really well (Monday).”

A day later, Mingus Union also beat Notre Dame Prep 14-0. The Lady Marauders scored two runs in the first, five in the second and seven in the fourth to get the five-inning victory.

“This was a game that I kind of anticipated we would do well, but I was happy to see them just play their game and play a game that wasn’t their game, I’ll leave it at that,” Brown said.

Junior first baseman/pitcher Kaycee Williams had 4 RBIs and two doubles and Mabery had 3 runs and 3 RBIs.

“Oh it’s just another one to our record,” said Zielinski, who scored three runs. “We hit the ball well (Tuesday) so we deserved that win.”

Zielinski said the Lady Marauders’ big wins set them up nicely for the tournament.

Williams had 6 strike outs and gave up 6 hits in five innings.

It does It puts us in a good place for the tournament, sets us up nicely

“It’s giving us some confidence but we’re not going to get cocky,” Williams said.

Brown said the shorter games helps the team because the pitchers have to throw less and they’re going into the tournament confident and with other teams worrying about them.

Williams said this year has been fun after sitting out last year after she transferred.

“This season is very good because I didn’t get to play last season so coming and winning is a lot of fun (laughs),” Williams said.