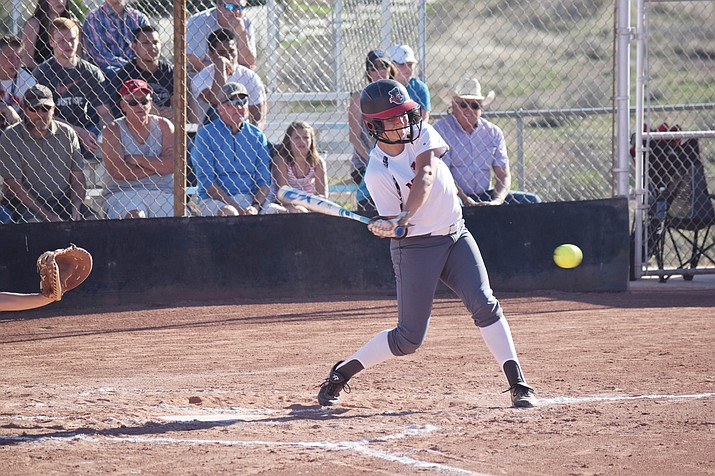 The Lady Marauders recently added her as a third captain “just because of her work ethic said Mingus Union head coach John Brown.

“She’s killing it,” Brown said. “She’s been doing a great job for us, she’s a leader, not just because of what she’s doing. She’s hitting the ball really well, she’s playing great defense but she’s leading.”

In Mingus Union’s 10-5 loss at Prescott on March 7, Zielinski had one hit and scored one run. However, in the Lady Marauders’ 14-2 win over the Badgers two days later, she was 4-for-4 from the plate, scored three times, had 7 RBIs, a double and two home runs, including a walk-off one in the 5th inning.

She also plays volleyball and basketball, where she was honorable mention All-Grand Canyon Region this season and soccer last year.

“She’s an amazing ball player,” said Brown, who has coached her since she was about nine. “Quite frankly one of the few kids I’ve coached that I think is a Division I quality ball player, she’s one of the few and I think she’ll end up with a four-year school.”

VVN: Were you surprised at how well you’ve been doing?

Zielinski: Well we’ve been putting in a lot of work, so it’s just nice to see it show.

VVN: How nice is it to rebound from a tough season last year to have one like this?

Zielinski: It’s definitely a difference but I think it’s our time.

VVN: How about for you personally, how do you think the season has gone?

VVN: Is it kinda natural to transition from other sports or is it hard with these shorter seasons?

Zielinski: Well I think every sport helps for the athleticism and it just kinda rolls into one.

VVN: I saw you played soccer last year but basketball this year, how come you changed?

Zielinski: Because I wasn’t allowed to play basketball my sophomore year so I just took up soccer to stay in shape.

Zielinski: Because I transferred from Sedona and I had to sit out.

Zielinski: Oh it’s been really good, it’s a great school, I really like it.

VVN: How are the girls? Like the Scottsdale (Notre Dame Prep) mentioned how fun you sound in the dugout.

Zielinski: It’s a great team, we’ve been together a long time, so it’s really fun.

VVN: How are you doing in school? I saw you had a pretty high GPA.

VVN: Where do you see yourself in five years?

Zielinski: I’m joining the fire science program at Yavapai so maybe that will be in my future.