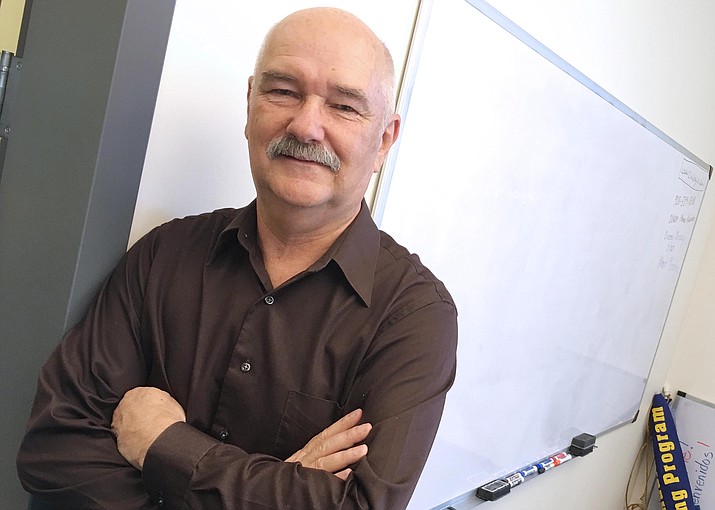 Due to changes in available funding for the state’s adult education programs, Camp Verde Adult Reading Program Director Doug Watson is looking at new ways to find funding. “We’re applying for small grants. We are not going to be shut down.” (Photo by Bill Helm)

VERDE VALLEY– In existence since 1988, the Camp Verde Adult Reading Program and LEARN Center was designed to help adults earn their GED or learn English as a second language.

Located at the Camp Verde Community Library and at the Cottonwood DES building, about 75 adult learners benefit each year from the program.

CVARP staff has made sure that curriculum is in tune with college and career readiness standards, so once a student earns that valuable GED, post-secondary education is within reach.

For programs such as CVARP – and Yavapai College Adult Basic Education – how Arizona’s adult education programs are funded will change drastically as of July 1.

Which may not be a bad thing.

What is Adult Education?

According to Craig Lefever, program director for Yavapai College Adult Basic Education, the purpose of Adult Education programs in Arizona is to help adults become literate by obtaining the knowledge and skills necessary to be employed and to take care of themselves.

Adult education programs are also tasked with helping adults further the educational development of their own children.

Many – not all – Adult Education students are learning English as a second language, which means they also benefit from acquiring an understanding of the American system of government, individual freedom, and the responsibilities of citizenship, Lefever said.

Times have changed – and so has funding

For the past several years, and until the 2017-2018 fiscal year, about $95,000 in state monies was available for Arizona’s adult education programs.

With the new RFGA – Request for Grant Application – the minimum award amount is almost double, now $180,000.

The new structure of the grant also mandates that participating programs must serve at least 100 students in a fiscal year.

In the current fiscal year, CVARP has enrolled about 60 adult learners, which means that the program would not qualify for the grant.

Which is why CVARP Director Doug Watson did not apply for the new grant.

“So we’re looking at a different model to get funding,” Watson said. “We’re applying for small grants. We are not going to be shut down. We’re going to find other ways of funding.”

Earlier this year, CVARP moved its office from Town Hall to a space in the first floor of the new Camp Verde Community Library.

In more ways than one, this has provided a great convenience for both the program and the people it serves. It has also benefited the program’s leadership, as Camp Verde librarian Alice Gottschalk is also the president of the CVARP’s board of directors.

“We’re a community program. So we need the community’s help,” Gottschalk said. “Now we have to operate in a different fashion. That’s what it boils down to.”

Public schools, private schools, non-profits are able to benefit each year when Arizona taxpayers take advantage of their right to dictate where a portion of their tax dollars are spent.

These tax credits, as they are known, allow the single filer to declare the destination of $200 in taxes, or $400 from a couple filing a single return.

These are tax dollars already spent. This isn’t a donation – it’s about taxpayers telling the State of Arizona where they want their taxes to go.

And the CVARP director says that he looks forward to Verde Valley’s taxpayers telling the state to direct their taxes to the community’s adult reading program.

“I’m looking for 200 people who would commit $400 of their state tax money to give it to our program, rather than send it to Phoenix,” Watson said. “We’re a qualifying charitable organization. Because of that, people can give as much as $400. If the state doesn’t want to direct money to us, then maybe the local tax payers would like to direct their taxes to us.”

For more information, call Doug Watson, director of the Camp Verde Adult Reading Program, at 928-567-3187, or by email at dougw@cvarp.org.

In the second part of this series, we’ll look at how the Camp Verde Adult Reading Program and LEARN Center, and Yavapai College Adult Basic Education, both meet the unique educational needs of the adult learner.