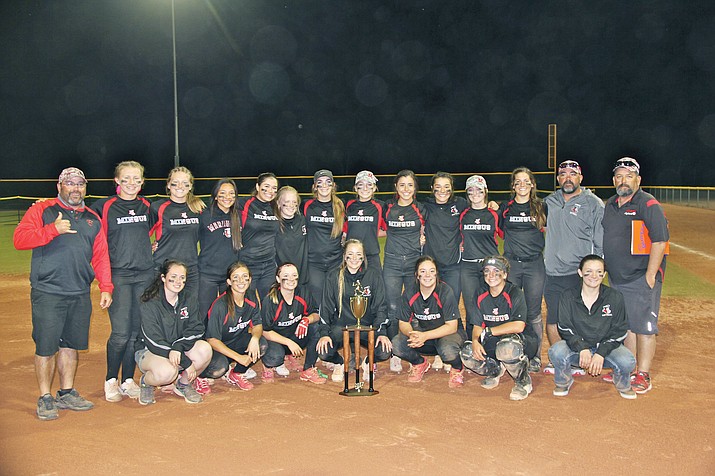 Mingus Union softball returned to regular season action with a loss but they picked up some hardware before hand.

On Tuesday, the Lady Marauders (11-3) lost 8-7 at Winslow on a walk off home run. The loss came a week before the first AIA rankings of the season come out.

“It was a great game and good team that we played, we knew it was going to be tough but to lose in that fashion is pretty disappointing,” said Mingus Union head coach John Brown. “That would have helped us out a lot with power points and at the end of the day it would have been some nice bragging rights but we lost fair and square.”

Prior to that, Mingus Union won the silver bracket of the Grace Lee Haught Memorial in Payson, going 6-1. The Lady Marauders were 8-1 over spring break.

The tournament’s seeding pushed Mingus Union into the silver bracket after they beat Show Low 7-6 and Joseph City 15-1 before falling 8-3 to Bourgade Catholic but they made the most of it. The Lady Marauders beat Round Valley 12-4, Santa Cruz Valley 14-4 and Snowflake 14-4 and 7-3 to take home the trophy.

“They were good, competitive teams all around, everybody we played had good bats and they were very competitive pitching wise, so I think it was a good test for us,” Brown said.

Junior third baseman/short stop Nikki Zielinski made the all-tournament team after batting over .500, hitting five home runs and getting 19 RBIs. She was Mingus Union High School’s athlete of the month and is contention for the Arizona Republic’s state softball athlete of the week.

“She was a big stand out,” Brown said. “Maddie Bejarano always does a good job, she batted .600 for us on the weekend.”

Up next for Mingus Union is a trip to Mohave on Saturday. Their next home game is Tuesday against Bradshaw Mountain.

Brown did not know the last time Mingus Union won a softball tournament.

“(Laughs) I don’t know, it’s been a while,” Brown said. “My daughter played in the 2009 area is when she graduated, so it’s been before that even.”